7amleh – the Arab Center for the Development of Social Media – organised an event titled “Amplifying the Palestinian Voice on Wikipedia”, which took place on Tuesday 3rd March 2015. The aim of the event was to discuss how to enrich the Arab and Palestinian content on the ‘Free Encyclopaedia’ of Wikipedia 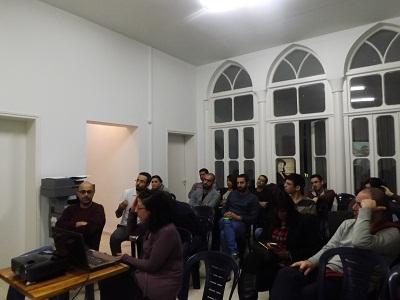 The roundtable was attended by both experts of, and those interested in, the field of digital space and specifically the website Wikipedia, its importance as a primary source of information. Many attendees were particularly interested in the role of Arab and Palestinian contributions in developing Wikipedia into an accessible and easily available resource which benefits everyone.

The roundtable was chaired by Rasha Hilwi and opened by Nadim Nashif, who spoke at the 7amleh centres aims and its current and future activists. The first speaker on the panel –Nidal Jarrar, a Jordanian-Palestinian Wikipedia editor and administrator- participated by via Skype. Jarrar spoke about his personal experience of being involved with Wikipedia. He emphasised the importance of volunteering and other efforts in enriching the Arab and Palestinian content on the website, as well as the necessity of following rules for article contribution to the ‘Free Encyclopaedia’ such as easily understandable text, objectivity and neutrality. Jarrar highlighted the importance of these rules in developing Wikipedia as an easily understandable, rich and reliable source.

The second speaker on the panel – a technician with interest in internet content, Maysara Abdul Haq- also participated via Skype from Ramallah, and primarily spoke about Wikipedia as a platform for reproducing the prevailing discourse. Abdul Haq spoke about the scarcity of rich Arab content, which heavily depends on frequently translating articles from other languages. Abdul Haq suggested that a more developed Arab and Palestinian presence on Wikipedia content could reshape the prevailing discourse as well as correct articles which contained poor information and references regarding Palestinian issues. Abdul Haq also spoke of the importance of having active volunteers on Wikipedia who were able to produce an Arab Palestinian narrative which can be reliably used as a resource showcasing our history, knowledge, science and stories.

The third presentation of the roundtable discussion was by Marwa Hannah and Alaa Kabha – Wikipedia editors and activists- who spoke about the fundamentals of writing for Wikipedia, which they demonstrated used various examples of rich and scarce subjects, which are absent from Wikipedia. Hannah and Kabha explained each of the mechanisms of ‘Free Encyclopaedia’, outlining how to establish a private account on Wikipedia, amending or creating an article, the rules and codes of writing and even promoting articles on a digital platform.

After the final presentation, audience participants began a discussion on how, as Palestinians, they could build on the practical advice they had been given, and the methods with which they could implement what had been discussed. Participants were eager to take up the issue in other circles through recruiting volunteers – especially university students- to enrich the Palestinian content of Wikipedia.

"Connection Interrupted ": A New Report of 7a...