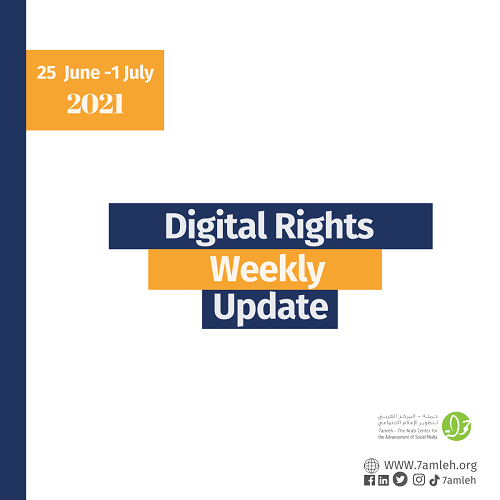 The Palestinian Digital Rights Coalition denounces the Palestinian security forces crackdown on the peaceful protests guaranteed in the Palestinian Basic Law and the international human rights conventions to which the State of Palestine has acceded.

The discourse of 'algorithmic glitches', which is asserted as a justification by social media platforms in the case of Palestine, cannot be separated from the corrupt worldview shared by these platforms.

Abu Kaf: This is how the "digital divide" deepens the economic and social gaps (Arabic)

Researcher Ghalia Abu Kaf from the unrecognized bedouin village of Umm Bateen published a study underscoring the “digital divide” the bedouin residents of unrecognized villages in the Naqab suffer from, and how it is directly connected to the colonial situation that has historically pushed these residents to the margins. The absence of adequate infrastructure in addition to other socio-economic gaps have led to these communities' inability to access information and properly participate in society, thus only widening the digital divide Abu Kaf highlights.

First published in the Electronic Intifada, this report underscores the relationship between the Israeli government and social media companies and the companies’ bias in their treatment of Palestinian content vis-a-vis Israeli content. The article documents the latest attempt by the Israeli Prime Minister to shut down TikTok across the country, recent meetings between Israeli officials and social media companies, as well as the historical cooperation between said companies and Israel’s Cyber Unit. The article sites two studies by 7amleh, one regarding the chilling effect censorship has on Palestinian users and the other regarding the bias in the reports sent by the Israeli Cyber Unit as it almost only targets Palestinian content.

Experts to Wattan: Raising women's awareness of their digital rights protects them from electronic blackmail (Arabic)

Experts stressed the need to raise awareness among women in marginalized communities about digital rights and digital protection measures, to protect them from extortion and electronic defamation.

The Palestine Monetary Authority is considering issuing a digital currency, in a move that could give it at least some symbolic monetary independence from Israel.

REBECCA STEIN ON WAR IN THE SMARTPHONE AGE (English)

Across Twitter, Tik Tok and other platforms, viewers shared videos of Israeli police firing rubber bullets and Palestinian protestors throwing rocks, as well as images of Palestinian rockets and Israeli airstrikes. The conflict unfolding on the ground was paralleled with this online media war, fueled by the proliferation of images captured in the midst of battle and occupation.

Today, Israeli restrictions imposed on the freedom of movement of Palestinians shape our lives to the minutest details. The separation of Palestinians from one another due to Israeli policies is not new and takes different forms. My family, like thousands of others, have suffered a great deal because of Israeli travel restrictions.

The battle over optics and perception has formally migrated online, where social media has been a game changer in revealing the rising tide of ultra-nationalism within Israel, writes Benjamin Ashraf.

Facebook can track you across the web. Here's how to stop it (English)

No, the Off-Facebook Activity tracking rumor is not a hoax. Here's how to keep the social media platform from tracking your web browsing.