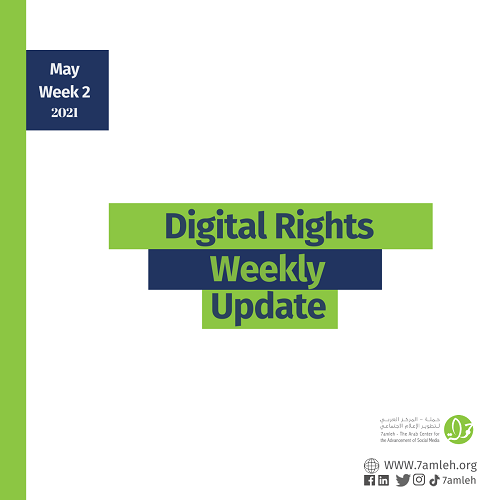 The National reported that hundreds of posts and accounts documenting events in Sheikh Jarrah and ِAl-Aqsa Mosque as the situation escalated in Jerusalem. While Instagram related the removals to a technical error, the National reports that restriction on posts continued after the alleged glitch was patched. The article also brings into the light the way Arabic content is often moderated without context. Nadim Nashif, Mara Fatafta and Khaled Elgindy commented on how Arabic content is often misinterpreted and indiscriminately censored.

Suara reported on the hundreds of posts and accounts that were deleted by Facebook, Twitter and Instagram, for addressing the situation in Sheikh Jarrah and al-Aqsa. In an important development, Twitter hid an #Aqsa hashtag as violence erupted in the Aqsa Mosque, which is a new tactic. Nadim Nashif talks about 7amleh’s work to restore removed accounts and posts, the two main channels through which censorship online takes place against Palestinians, and the bias in current content moderation systems.

As Palestinians took to social media to protest pending evictions, some found their posts removed or their accounts blocked, Reuters/ English

Reuters reported on the 200 cases of content removal handled by 7amleh as tension escalated in Jerusalem. While Instagram and Twitter related the removals to technical errors, the report argues that bias and lack of transparency in the algorithms that automatically remove content on these platforms were behind this issue. Mona Shtaya comments on the types of removal that were undertaken by each platform, Hind Khoudary comments on her personal experience with the content removal on Instagram, and Marwa Fatafta addresses bias and lack of attention to context in the platforms’ policies that lead to these errors.

Arab News interviews Maha Rezeq who comments on her experience with the removal she posted about house evictions in Sheikh Jarrah, and Nadim Nashif who elaborates the two main channels through which Palestinians are often censored online, as well as the built in bias in content moderation algorithms.

Middle East Eye reported on the removal of hundreds of posts and accounts addressing the escalating violence in Sheikh Jarrah and Jerusalem. Mina Shtaya commented on Instagram’s apology in which they relate the removals to a technical glitch. Mona connects these removals to a larger trend that has taken place for many years, and explains why such reasoning does not make sense and only works as an excuse. Marwa Fatafta also comments on the ways bias and non-transparency in content moderation policies are the main reason behind these removals.

Aljazeera reported that hundreds of accounts and posts on Sheikh Jarrah and Jerusalem were arbitrarily removed. While Instagram released an apology relating the issue to a technical bug, Mona Shtaya from 7amleh said that removals continued after the bug was fixed, and argues that this is part of a larger and much older problem. Shtaya points to multiple studies by 7amleh-The Arab Center for the Advancement of Social Media, that document the ways social media companies have been censoring Palestinian content, in compliance with the request of the Israeli government, for years.

Facebook and Twitter are systematically silencing users protesting and documenting the evictions of Palestinian families from their homes in the neighborhood of Sheikh Jarrah in Jerusalem, 7amleh/ English and Arabic

7amleh and 27 other regional and international digital rights groups sign on a petition calling Instagram, Twitter and Facebook, following the censorship of Palestinians addressing the events of Sheikh Jarrah and in Jerusalem, to open an investigation into the content that was removed, provide transparency on how their automated algorithms work, immediately reinstate suspended accounts, publicly commit to resisting states pressure on social media companies, and publicly release data about requests by the Israeli cyber unit to remove Palestinian content.

The New Arab reported on three cases of content removal, among the hundreds of accounts and posts that were removed for documenting the evictions taking place in Sheikh Jarrah. The New Arab contacted Instagram, which responded that the removals were part of a widespread technical bug. However, the report highlights parts of Instagram’s content moderation policies, such as hate speech and graphic violence policies, which may have been used to authorize these content removals.

The National reports on Instagram,’s apology after removing hundreds of pieces of content about the evictions in Sheikh Jarrah, and relating the issue to a technical error. The report further addresses calls by Palestinian activists to give one star ratings to the platforms in residence to the censorship.

“Palestine and PayPal - Towards Economic Equa...