Facebook and Twitter are systematically silencing users protesting and documenting the evictions of Palestinian families from their homes in the neighbourhood of Sheikh Jarrah in Jerusalem. 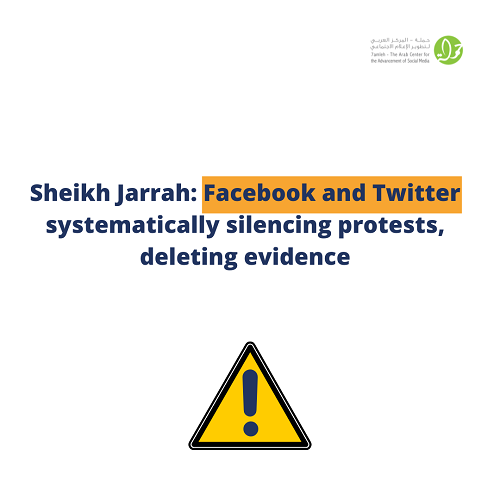 Facebook and Twitter are systematically silencing users protesting and documenting the evictions of Palestinian families from their homes in the neighbourhood of Sheikh Jarrah in Jerusalem. We demand Facebook and Twitter to immediately stop these takedowns, reinstate affected content and accounts, and provide a clear and public explanation for why the content was removed.

In the past days, people have taken to Facebook, Instagram and Twitter to document and denounce Israeli police brutality and violent attacks by Jewish settlers against Palestinian activists and residents who are peacefully protesting against the imminent threat of being evicted from their homes.

In a rapid escalation, hundreds of posts and accounts documenting these violations, have been deleted on Instagram and Twitter. The scale of these content takedowns and account suspensions reported by users and documented by digital rights organizations is egregious and pronounced.

Facebook and Twitter have not provided any explanation to their users for these actions. Instagram, for instance, has removed hundreds of stories related to Sheikh Jarrah including archived posts. The platforms’ arbitrary and non-transparent decisions constitute a serious violation of Palestinians’ fundamental rights including their right to freedom of expression, and their right to freedom of association and assembly online, which both Facebook and Twitter have pledged to honor in accordance with the United Nations Guiding Principles on Business and Human Rights. Though work is being done to escalate these cases with Facebook and Twitter, timing is critical- users from Sheikh Jarrah have made it clear that without the world’s attention they would be in even more danger. We demand Facebook and Twitter to immediately stop censoring and reinstate the accounts and content of Palestinian voices. These companies must open an investigation into these takedowns, and transparently and publicly share the investigations.

The removed content and suspended accounts on both Instagram and Twitter are involved in documenting and reporting what is happening in Sheikh Jarrah, as well as denouncing Israel’s policies of ethnic cleansing, apartheid and persecution. These violations are not limited to Palestinian users, but also affect activists around the world who are using social media to raise awareness about the grave situation in Sheikh Jarrah.

This latest spate of content takedowns is part of a wider pattern of consistent censorship of Palestinian and allied voices and systematic efforts to silence them, which civil society organizations have documented for years. Similar past cases related to takedown of Palestinian speech on these platforms have been attributed to requests by Israel's Cyber Unit, an internet referral unit whose mission is to submit ’voluntary’ requests to social media companies for content removal.

The content coming from Sheikh Jarrah illustrates the sheer number and severity of human rights violations requiring digital documentation and media awareness. Social media platforms provide a crucial space for communities with no other recourse to make their demands for freedom, justice and dignity heard. Online spaces should be available for organizations, activists and human rights defenders to expose and document the human rights violations on the ground. This can only work when platforms build transparent and coherent content moderation policies based on international human rights standards, and apply them in a consistent, transparent and equitable way.