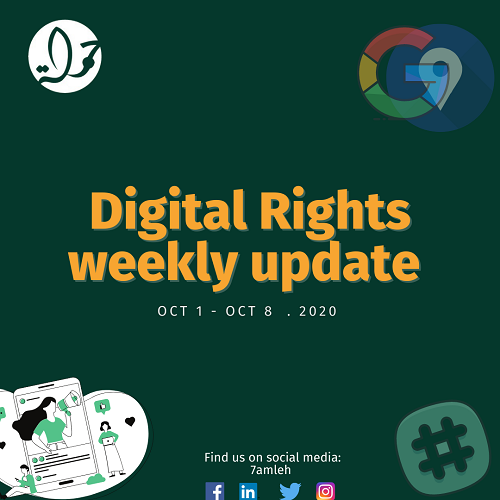 2. Zoom is involved in digital discrimination against Palestinians (Arabic) - The New Arab

Social media platforms are witnessing an unprecedented campaign to close down the pages and accounts of dozens of Palestinian journalists and activists, aiming to prevent the Palestinian narrative from being spread around and influencing globally. Specialists called for a boycott of Facebook and organizing an official and popular movement with the aim of pushing the site’s management to stop pursuing Palestinian content and its bias towards the Israeli occupation.

4. A case against "Google" in Jordan over the deletion of the name "Palestine" on its maps (Arabic) - Arabi21

A Jordanian citizen and a team of 6 lawyers filed a case against Google’s branch in Jordan, because of the latest removal of Palestine from its maps applications, and the replacement of Palestinian city names with Hebrew names.

5. Adalah calls for "a ban on espionage and data collection by military means", under the pretext of CoronaVirus (Arabic) - Arab48

Adalah announced in a statement that it is going to legally address the Prime Minister, Benjamin Netanyahu, the Minister of Security, Benny Gantz, and the attorney general, Avichai Mandelblit, to demand that they "prohibit espionage and data collection through military means under the pretext of fighting the Coronavirus."

6. In Support of the International Day of the Right to Access Information 7amleh holds Webinar on Fake News in Palestine - 7amleh

7amleh - The Arab Center for the Advancement of Social Media held a webinar to discuss the findings of its recently published research "Fake News in Palestine: Exploratory Research into Contents, Channels and Responses". The webinar took place on the international day for the right to access information.

An Israeli military court convicted on Wednesday a Palestinian activistof incitement and posting symbols of an illegal organization on social media,even though Border Police said he was arrested after participaing in protestsin the West Bank.