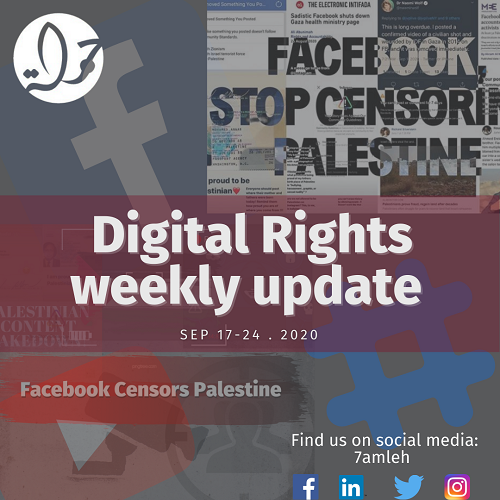 1. A Palestinian cry against Facebook ... A campaign to stop the "censorship" war (Arabic) - Al Ain

Palestinian activists launched the hashtag #FacebookCensorsPalestine, and it quickly turned into a massive campaign to lift censorship of Palestinian speech on Facebook’s platform. The campaign fights against what they describe as fighting Palestinian content on Facebook, the most widespread social media platform in the world.

Major Silicon Valley companies censored an event at San Francisco State University on Wednesday.This means that during the pandemic, private companies closely aligned with the government have immense power over what can be said, even in an academic setting.

4. A shortage in 400,000 computers in light of e-learning: The Israeli Ministry of Education did not distribute any (Arabic) - Arab48

The Child Rights Committee in the Israeli Knesset said that the Ministry of Education does not have any reliable information about the number of students who do not have a computer, and the Ministry has not yet distributed even one computer to students, despite the fact that more than than a half a year has passed since the emerging Coronavirus (Covid-19) crisis, in the light of distance e-learning.

Zoom announced late Tuesday afternoon that San Francisco State University will not be allowed to use its videoconferencing platform to host an event Wednesday featuring Palestinian hijacker Leila Khaled because her participation in the virtual event violates company policy.

Increasingly, Israel's  attempts to censor Palestinians are being fought on social media. As Facebook’s Head of Policy for Israel and the Jewish Diaspora, Jordana Cutler is at the forefront of the social media giant’s efforts to further the agenda of Israel and the Israeli and Zionist lobby by working to control incitement and hate speech online.