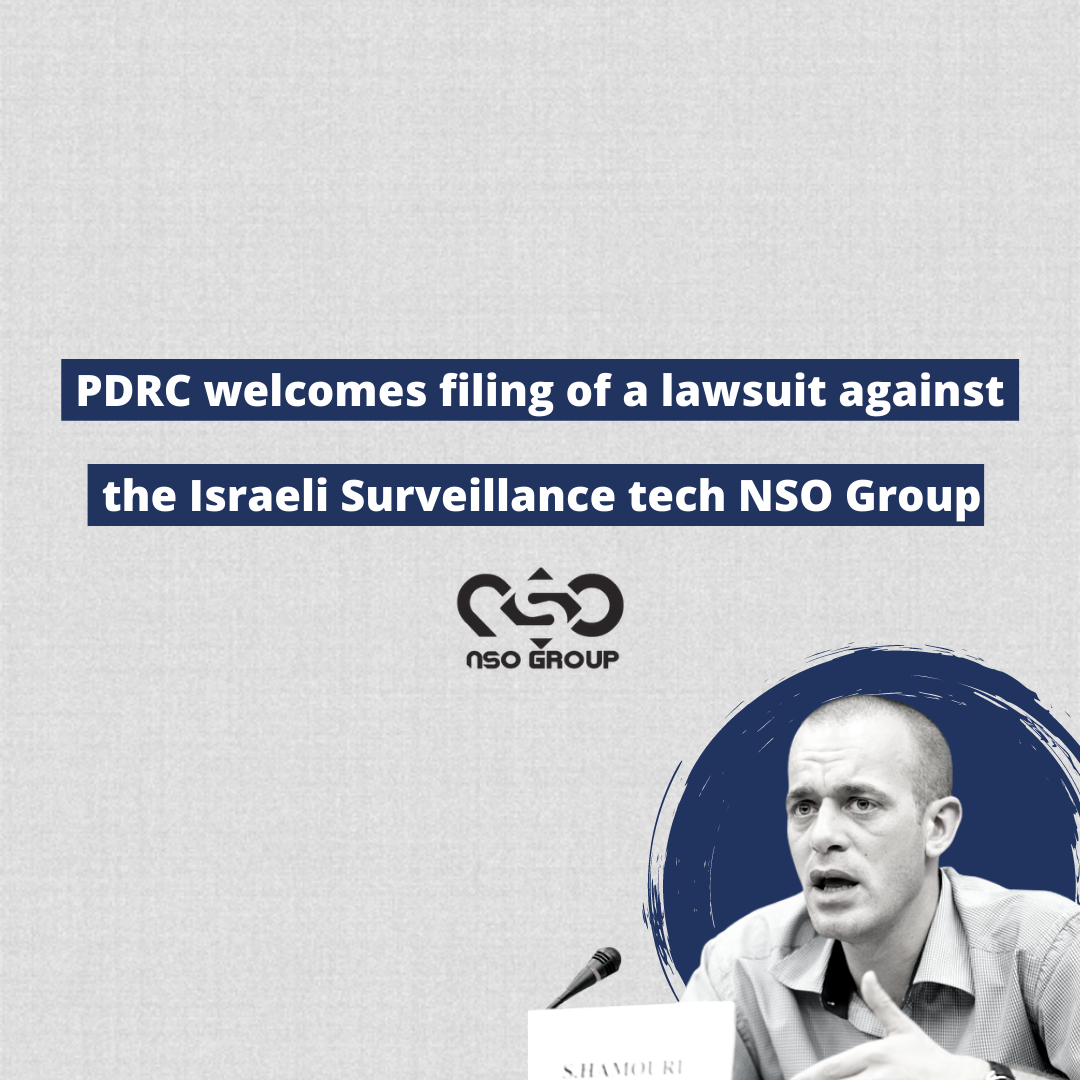 The Palestinian Digital Rights Coalition (PDRC) welcomes filing of a lawsuit against the Israeli Surveillance tech NSO Group for infiltrating the phone of Palestinian-French lawyer and human rights defender Salah Hammouri* and calls on the immediate moratorium on the sale, transfer and use of the NSO Group's Pegasus spyware, among other demands.

We support the effort of The International Federation of Human Rights (FIDH), The Human Rights League (LDH) and Salah Hammouri in filing a complaint in France targeting NSO Group, for illegally infiltrating the phone of Salah Hammouri, a violation that was initiated in Palestine and continued on French soil, which constitute violation of the right to privacy under French law and international human rights conventions.

Frontline Defenders revealed in November 2021 after an  investigation in coordination with Citizen Lab and Amnesty International that the phones of Mr. Hammouri and other Palestinian human rights defenders were hacked by technology of the NSO Group, an Israeli technology firm known for its Pegasus spyware. The investigation confirmed that Mr. Hammouri’s phone has been infiltrated since April 2021. NSO Group has been using this spyware illegally to hack and infiltrate not only Mr. Hammouri’s phone but rather his entire professional and private life, depriving him from his right to privacy among others.

Through the use of several systematic illegal policies, practices and techniques, Israel has entrenched its invasion of Palestinians right to privacy, and control over everyday life, infringing on the rights to privacy, liberty and personal security and dignity, enshrined in the Universal Declaration of Human Rights including article 12, and core international human rights conventions. The use of Israeli NSO Group's Pegasus spyware - which has been blacklisted in countries including the US for being used as a "tool to maliciously target government officials, journalists, businesspeople, activists, academics, and embassy workers"- is only one example of multiple technologies Israel is producing and using to target and surveille Palestinians’ professional and private spaces.

The use of surveillance techniques must stop, perpetrators must be held accountable, and victims including Salah Hammouri must receive justice. Governments around the world have a duty to protect its citizens by adopting regulations compliant with human rights regulations and principles to ensure the safety and protection of its citizen, they shall further ensure transparency in how surveillance technologies are developed and deployed, and sanction companies that depend on the exploitation of the oppressed communities and in this case, the Palestinian people who have endured and are still struggling against settler colonialism and Israeli apartheid. Palestinians, and other oppressed individuals and communities should not be the testing ground for oppressive regimes and technologies.

As Palestinian Digital Rights Coalition we call on:

Salah Hammouri has been the subject of Israeli persecution since the age of 15 when he sustained a bullet injury in 2000. He was first arrested at the age of 16 and has since then been facing continuous harassment by Israeli authorities, including six periods of imprisonment and arbitrary arrests, several travel bans, exorbitant bail and fines, house arrests, separation from his family, residency revocation and most recently on the 7th of March 2022 yet another illegal administrative detention for a period of three months subject to indefinite extensions according to the Military Emergency Laws applied by the Israeli authorities.

On 18 October 2021, Israel's Minister of Interior issued a decision to revoke Mr. Hammouri’s permanent residence card in Jerusalem. The decision is based on Mr. Hammouri’s alleged “breach of allegiance to the State of Israel” and on vaguely worded and poorly defined allegations of "terrorist activities" and/or affiliation with "terrorist entities," relating to "secret information." If this measure is implemented, it would mean that Mr. Hammouri, who was born and has lived in Jerusalem since 1985, would be permanently expelled from his country of origin without being able to return. It would also set an extremely dangerous legal precedent to be used systematically by Israeli authorities to revoke residencies of Jerusalemites in its attempt to ethnically cleanse Palestinians from Jerusalem.