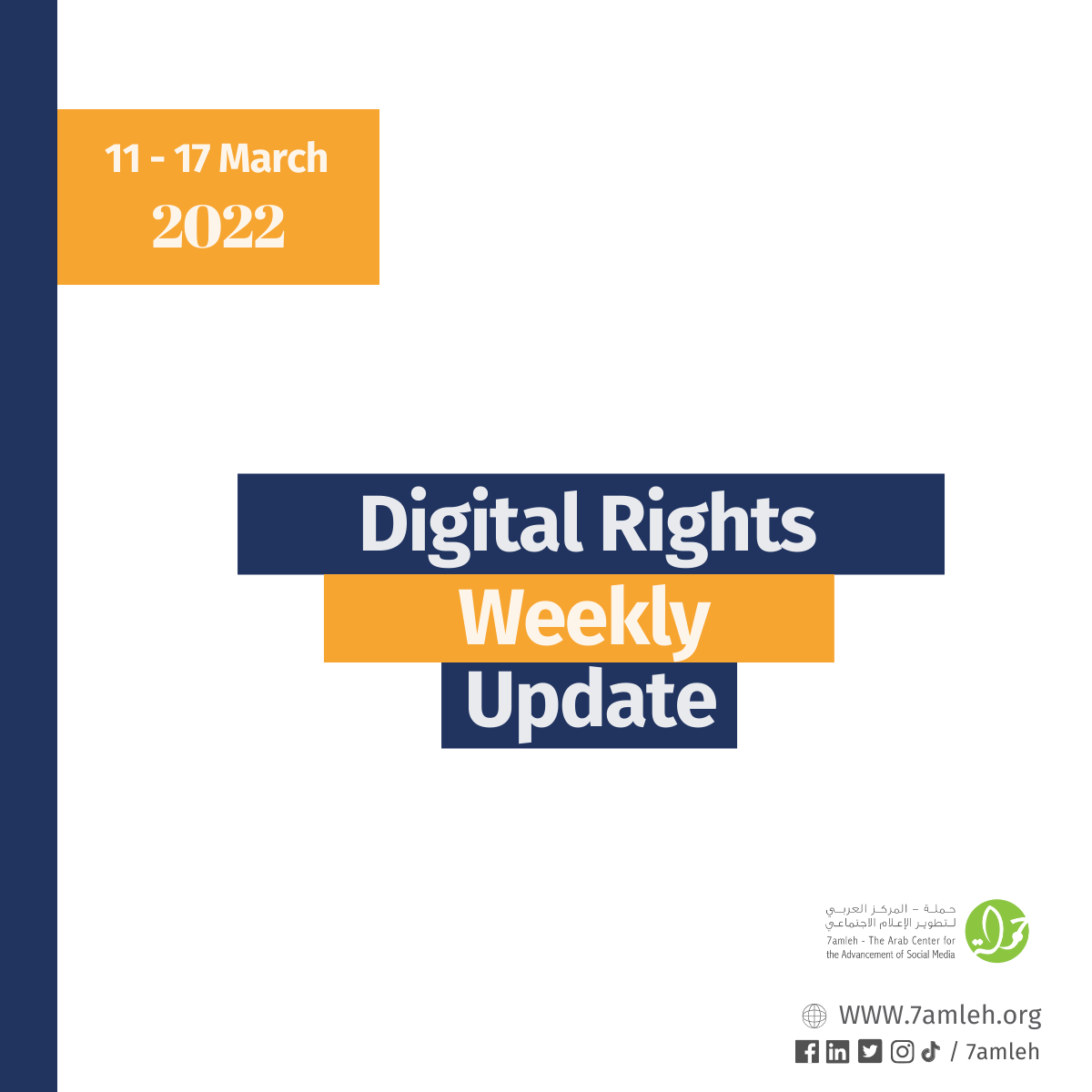 7amleh - the Arab Center for the Advancement of Social Media, is today (15 march) announcing the launch of the sixth edition of the Palestine Digital Activism Forum and opening the registration for participants. The Palestine Digital Activism Forum 2022 is the largest online event for Palestinian digital rights, and this year's forum will be held over three days between May 17th and May 19th of this year. This year's forum will take place in cooperation with almost sixty partner institutions. The forum will bring together 120 local, regional and international speakers and trainers, most notably Palestinian-American Congresswoman Rashida Tlaib and the United Nations Special Rapporteur on the situation of human rights defenders, Ms. Mary Lawler. Government representatives such as Dr. Ishaq Sider, the Minister of Communications and Information Technology will also be speaking.

According to 7amleh, the Arab Centre for the Advancement of Social Media, “[t]he Jerusalem municipality has not released information regarding the technical capabilities of these systems; however AnyVision, a biometric start-up responsible for the facial recognition cameras installed at major checkpoints throughout the West Bank […] claims its cameras could identify any pedestrian, day or night, with or without a face mask, and track their movement across any urban space.”

MADA: 562 Violations of Media Freedom in Palestine During 2021 (English)

The year 2021 witnessed a total of 562 violations against media freedoms in Palestine, 368 of which were committed by the Israeli occupation, the most serious of these was the killing of journalist Youssef Abu Hussein, media graduates Abd al-Hamid al-Kolak and Muhammad Shaheen in Gaza Strip, meanwhile Palestinian sides committed 123 violations, while social media networks committed 69 violations, and other parties committed 2 violations. This increase in the number of violations constitutes 137% of the violations compared to the previous year.

Sada Social Center monitored a number of violations and abuses carried out by the administration of social media sites against Palestinian content during February as the Center documented more than 30 violations against Palestinian content, most of which on the Facebook and Instagram platforms.The two platforms targeted many media and press accounts while covering the events in the Sheikh Jarrah neighborhood, and the news of the martyrdom of three Palestinian in Nablus.

A worker objected to Google’s Israel military contract. Google told her to move to Brazil (English)

More than 500 Google workers have rallied behind a colleague who alleges she is being pushed out of her job because of her activism within the company, the latest flare-up between the tech giant and employees who speak out against its business practices and workplace conditions. The workers have signed a petition accusing Google leadership of “unjustly retaliating” against Ariel Koren, a product marketing manager at Google for Education, for voicing criticism of Project Nimbus, a $1.2-billion contract Google and Amazon Web Services entered into with the Israeli military and government.

Through all ways and means, the Israeli occupation had, since its existence, and continues, deliberately and purposefully restricts the Palestinian content that marks the daily suffering and oppression the defenseless Palestinian people are exposed to under unjust policies. The Facebook company, which aligns with the Israeli occupation, promotes illegal and unfair policies to marginalize the Palestinian narrative. Many Palestinian voices have been silenced under the pretext of violating the “Community Guidelines” for Facebook and Instagram– simply for revealing Israeli crimes. On February 24. Meta, the parent company of Facebook and Instagram, has recently announced that it has changed its policies regarding combating calls for violence in several countries. This is due to Russia’s war against Ukraine. Meta has allowed posts on Facebook and Instagram to call for violence and death against Putin and Russian soldiers. So Facebook and Instagram allow hate speech and racism to spread as far as they want, depending on their purposes.