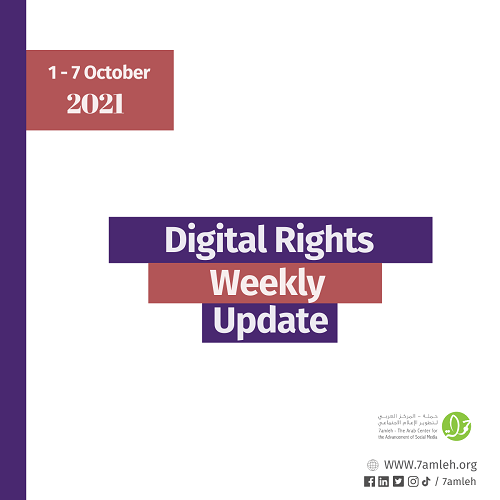 Tens of human rights organizations have joined together to tell PayPal to stop denying its services on discriminatory grounds to Palestinians in the occupied Palestinian territory (OPT), including the West Bank and Gaza. The coalition has sent a letter to Paypal to request that the company brings it’s policies in line with international human rights law and to request that the company engages directly with Palestinian civil society representatives to work together towards a sustainable solution.

The study indicates a noticeable increase in the use of hate speech among Palestinians on social media platforms, influenced by events and tensions in regional politics, as well as by global events generally. Hate speech is influenced by internal disturbances and changes in the Palestinian scene, particularly at the social and political levels, whether In the West Bank, Gaza Strip, Jerusalem, or in the 1948 territories. With the expansion of the virtual space, and the increasing presence on social media platforms, the behavior of Palestinians virtually has become a mirror of what is happening on the ground

Touchy subject: We must end self-censorship on Israel and Palestine (English)

Having lived with these sorts of attacks for many years — and this book will lead to a new round — I believe that they are a deliberate tactic. I think the aim is to make journalists and editors decide that, even if they have a legitimate story that may criticise Israel, it is simply not worth running it because it will cause “more trouble than it’s worth”. As Agence France-Presse correspondent Philippe Agret says, the aim is to “exhaust” journalists and editors so they think twice before writing anything critical of Israel.

The sudden malfunction in its services cost Facebook about $164,000 in losses per minute -- nearly $60 million in total. The company’s shares witnessed a decline of more than $40 billion from its market value, which cost Facebook’s Founder Mark Zuckerberg personal losses of around $6 billion, after the social media giant faced an unprecedented outage that lasted nearly 6 hours. This  comes after WhatsApp, Facebook and Instagram applications around the world stopped working yesterday evening (Monday) including at least tens of millions of users. Problems with accessing Twitter, Google and Amazon have also been reported.

What did the Palestinian Digital Rights Situation look like in September? (English)

Facebook’s Oversight Board reviewed a status by an Egyptian activist where he shared a post by a news page on the Qassam Brigades during the latest aggression on the Gaza Strip, and did not find in Facebook’s conclusions any justification for removing the content and classifying it as a form of incitement. The board made a number of recommendations, the first of which was conducting an independent investigation on the moderation of Palestinian content