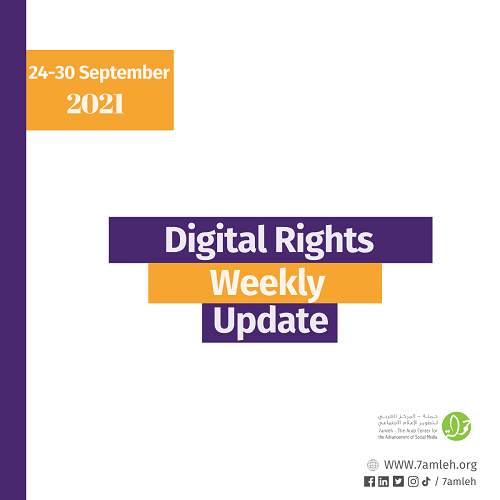 We, the undersigned organizations, welcome the recent decision by Facebook’s Oversight Board on Facebook’s unjustified removal of news content related to the recent bout of violence in Palestine and Israel under its Community Standard on Dangerous Individuals and Organizations. (English)

While Facebook restored the content, the case is emblematic of Facebook’s systematic arbitrary and non-transparent overenforcement of this Community Standard, particularly in relation to Arab and Muslim communities often at the detriment of users’ freedom of expression, and their freedom to seek, receive, and impart information. During the period of May 6 - 19, 2021, Instagram removed or restricted at least 250 pieces of content related to Palestine and #SaveSheikhJarrah campaign, while Facebook removed at least 179. The reported cases are only the tip of the iceberg with speculation these numbers reach the thousands.

On the twenty-eighth of September of each year the world celebrates the International Day for the Universal Access to Information. Given the importance of this right and its close linkages to freedom of access to information, and therefore the validity and accuracy of access and transmission of information, the celebration of this day comes within the framework of international efforts aimed at promoting openness and transparency, which enables citizens to Obtaining information related to public affairs, in order to reduce widespread rumors due to the absence of information and facts.

Enactment of the Law on the Right to Access to Information empowers society to participate in the decision making process. By allowing access to information, the law provides a tool that enables society to exercise the right to accountability for public administration and management of public finances, particularly in relation to basic services, including health, education, work, employment, land, judiciary, and state resources and spending. The law will also favourably impact aspects of legal activity and service provision in society, such as telecommunications, water and power supplies, right to freedom of expression, and freedom of the press.

Events over the past few years have revealed several human rights violations associated with increasing advances in artificial intelligence (AI). Algorithms created to regulate speech online have censored speech ranging from religious content to sexual diversity. AI systems created to monitor illegal activities have been used to track and target human rights defenders. And algorithms have discriminated against Black people when they have been used to detect cancers or assess the flight risk of people accused of crimes. The list goes on..