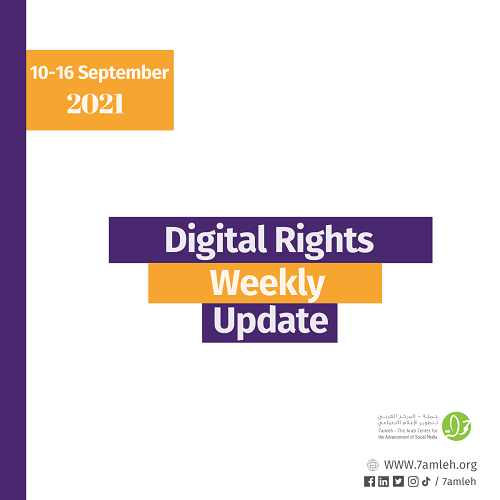 7amleh, the Arab Center for Social Media Advancement has released its quarterly report on violations of Palestinian digital rights in the months of June, July and August. A statement issued by 7amleh stated that the report "sheds light on the most prominent digital violations by various parties and entities, and clarifies the most prominent repercussions on the state of Palestinian digital rights following recent developments in the Palestinian arena. The report also refers to additional violations by the Israeli authorities and technology companies."

Undergraduates have embraced social media as a platform to comment on Israel and Palestine. Should we? (English)

Following the outbreak of protests against the pending evictions of Palestinians from the Sheikh Jarrah neighborhood of East Jerusalem this past May, my Instagram feed exploded. Observers were quick to take sides on the conflict in the form of conflicting, and sometimes false, narratives. For Palestinians in the West Bank and Gaza, social media has given their struggle international attention they have been denied time and time again.

Incitement has become an increasingly common charge since 2016, when Israel passed an updated counterterrorism law. The law broadened the legal definition of the term to encompass not only speech that “directly calls for violence,” but also speech that, in the judgement of prosecutors, “expresses support for terrorist acts,” with or without a resolution to carry them out. The incitement charges that have been brought against Palestinian social media users in last five years show that, when it comes to Palestinian speech on these platforms, Israeli police often define “support” as broadly as possible.

Facebook's Oversight board has recommended an independent review into alleged bias in moderating posts related to Israel and Palestinians. It comes after the board said the tech giant failed to answer all its questions around alleged censorship of Palestinian activists. The case centred around a user who shared an Arabic-language post from a news outlet about a militant group.

Within an hour of my Facebook post about the character of Zakaria Zubeidi, one of six Palestinian prisoners who recently escaped from Gilboa prison and among the four subsequently recaptured, Facebook had banned me for three days for violating their “community guidelines”. I wasn’t particularly surprised. I knew that many Israelis would promptly report it and get it wiped. That’s because I insist on seeing Zubeidi and his comrades as freedom fighters and not as terrorists. And I insist on providing the context for Zubeidi’s tragic, heroic path through life.

Apple issued emergency software updates for a critical vulnerability in its products on Monday after security researchers uncovered a flaw that allows highly invasive spyware from Israel’s NSO Group to infect anyone’s iPhone, iPad, Apple Watch or Mac computer without so much as a click.