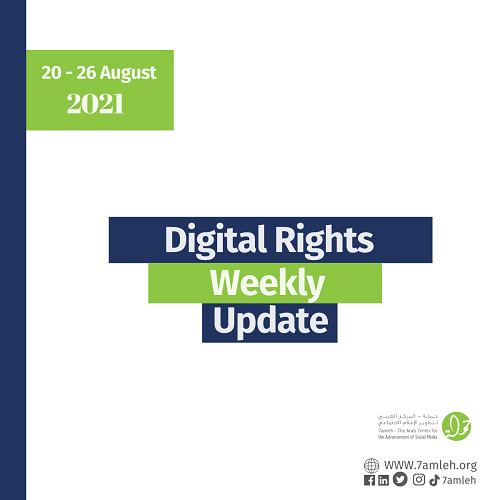 7amleh - the Arab Center for the Advancement of Social Media released a new investigative study titled "The Reality of Privacy and Digital Data Protection in Palestine” during a study day, specifically designated, to discuss the issue of privacy and digital data protection for Palestinians. The event was held digitally via the "Hopin" platform, with the participation of a number of specialists and representatives from different sectors and over 110 participants. This investigative study, which is the first of its kind in Palestine, attempts to examine and analyze the reality of privacy and data protection in Palestine, and addresses the different violations against Palestinians' privacy and data by various parties. The report showed that there is a strong interest among Palestinian users in introducing a new law on privacy and the protection of their data.

Internet service providers (ISPs) in Palestine are failing to protect their customers’ privacy. Through a  joint study, Privacy Violated: Protection of Customers’ Personal Information by Internet Service Providers in Palestine, ImpACT International for Human Rights Policies and Access Now explore how the absence of right-respecting and user-centric privacy policies are leaving individuals’ personal data up for grabs. Reviewing the privacy policies of seven major ISPs — Hadara, Mada, Fusion, Call U, Super Link, B Net, and Zaytona — the report assesses how these companies violate basic principles of customer data protection, and explores the level of customers’ awareness about privacy and data protection.

Three months after IGN took down its "How to Help Palestine" post of charity links, the site has republished it with a number of edits and a note about new editorial policies. The post, now headlined "A Resolution and New IGN Policies," omits changes phrases like "Palestinian civilians are currently suffering... due to Isreali forces" in favor of saying "Civilians are currently suffering..." A line about escalations in conflict resulting in "a catastrophic loss of Palestinian lives" has also been amended to read "a tragic loss of Palestinian lives."

“Wafa” monitors incitement and racism in the Israeli media

The Palestinian News and Information Agency (Wafa) monitored incitement and racism in the Israeli media from 15 to 21 August. In its (217) report, "Wafa" provides monitoring and documentation of inflammatory and racist discourse in the Israeli visual, written and audio media and on the social media of political and legal figures in the Israeli society.