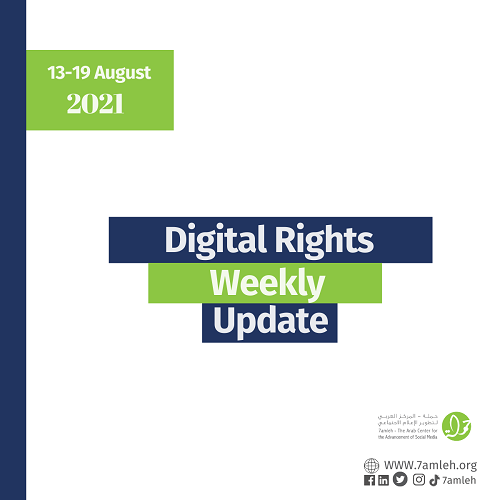 StandWithUs kicked off a national campaign by sending a letter to nearly 3,000 university directors, urging them to put a stop to the now-common practice of academic departments and student governments employing official university websites, social media accounts, and email listservs to promote anti-Israel activities.

Since 2001, Arab Advisors Group has been focused on delivering reliable primary research-based analysis of the Arab telecommunication and media markets in the form of periodic concise reports. There is a wealth of data in the social media sphere of today where interaction with the public and jockeying for position need to be tracked and interpreted for the business managers of today and this is why Arab Advisors Group is pleased to announce the launch of its new benchmark reports during September 2021 covering key telecom operators in MENA

Pegasus and How the Israeli State Militarises Cyber Technology

Last month, a consortium of 17 media organisations, along with Amnesty International and French NGO Forbidden Stories, published a list of phone numbers that were potentially targeted using Pegasus. Forensic analysis later confirmed that some of these numbers were targeted using Pegasus. Pegasus is spyware built by an Israeli organisation called NSO Group, which claims it only sells to governments. It can reportedly track locations, read all information on a device, and record phone calls. It can also reportedly plant information on a target’s device.

Pegasus and the global surveillance business

Pegagus is also being used against current high-level government officials. Among the people on the list: Three presidents, from France, Iraq, and South Africa; three current prime ministers, from Pakistan, Egypt, and Morocco; and one king (Morocco). That means all of them have been tracked and their private messaging probably collected—though exactly what was culled and who is doing the hacking are uncertain. All these Officials Refused to turn over their phones for forensic analysis.

“Final Line” Podcast | Do we have Rights on the Internet? With Nadim Nashif

“Final Line” Podcast presents, according to 7amleh’s statement, “key information we need to stay safe on the Internet -- safe from the violations of rights and social and mental harm that may impact us, our children and others.” In the podcast, we will get to learn key concepts in Digital Safety, in a simple and brief manner, and learn about key tips and available tools to stay safe on the Internet.

Madar Center
The Israeli settler colonial system has used various tools of oppression, both physical and moral, as a means to control the lives of Palestinians both in a hard and soft way, since the occupation of Palestine in 1948. It  has also incorporated over the course of decades of occupation, a set of modern means, especially technological ones, to perpetuate its occupation and control, and to violate the lives of Palestinians, as part of an attempt to subjugate and control them. Over the past years, it has resorted to relying more on technological means in its intelligence services to surveil Palestinians on the groun and on the Internet for several purposes ranging from reinforcing the idea of the "Israeli superpower" in the Palestinian consciousness to marketing these means and technologies globally after turning the occupied territories into testing grounds for such military and security technologies before being sold to other repressive regimes around the world. But most importantly, this use has certainly also been an expression of the constant state of fear and anxiety experienced by the colonial system amidst its endeavors to perpetuate its colonial project.

The Zionist Lobby: Digital Strategies to Fight Palestinians and Supporters

In this report, Abu Arqoub points to the presence of the Zionist lobby on all applications and digital platforms, officially and unofficially, in addition to their use of targeted digital campaigns to promote the Israeli and Zionist narrative of the Palestinian issue and reality of the Palestinian-Israeli conflict, “this is why we see digital campaigns targeting specific groups, audiences, countries, or even certain ethnic groups in America."