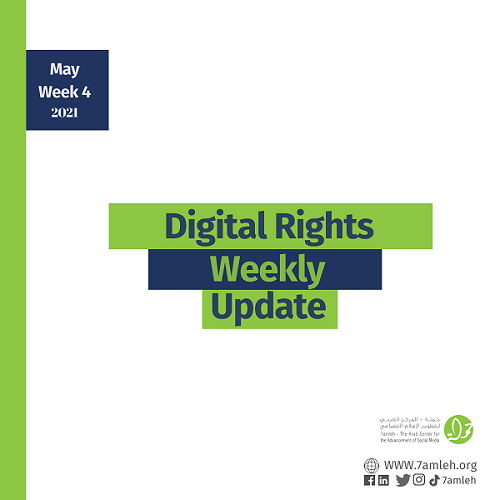 France 24 reported that the accounts of dozen of Gaza journalists were blocked by WhatsApp following the last aggression on the Gaza Strip. The report cited 7amleh’s recent report on the social media takedowns that targeted Palestinian content during the past month, which found that over 500 takedown had taken place, 50% of which were on Instagram, 35% Facebook, 11% Twitter and 1% on TikTok.

The guardian amplified 7amleh’s recent report which documented over 500 removals of Palestinian content off of Facebook, Instagram, Twitter and other platforms, had taken place during the last aggression on the Gaza Strip. The report quoted the CEO of the center, Nadim Nashif: “This censorship has been happening before this most recent crisis, and will continue to happen. We are asking for more transparency in content moderation – this is not enough.”

After accusing its search engine of bias against the Palestinians ... Google apologizes for any unintended insult

Aljazeera reported that Facebook had issued an apology regarding the recent controversy that was sparked after activists found that the search engine lists the Palestinian Keffeyeh as a terrorist symbol.  The report quoted the CEO of 7amleh, Nadim Nashif, who commented on the matter: “This discovery showed how the major technology companies were forming negative narratives.”

Google links the keffiyeh with “terrorism” and YouTube translates the word “Palestinians” into “terrorists”!

Watan reported that activists had recently noticed that the google search engine lists the Palestinian kaffiyeh as a terrorist symbol. The report associated this discovery with other Google policies that have for long threatened the digital rights of Palestinians. In doing so, the report cited Nadim Nashif from 7amleh, who said that this part of a larger pattern, and that research done by 7amleh - The Arab Center for the Advancement of Social Media, has long documented the different ways Google has continued to violate the digital rights of Palestinians.

A letter signed by 600 employees at Amazon, urged the company to acknowledge the pain and suffering of Palestinians, and to sever all ties with the Israeli military, just a day after Amazon Web Services (AWS) and Google signed a $1.2 billion deal with Israel.

Gaza and Israel: WhatsApp "bans" the accounts of dozens of Palestinian journalists

BBC reported that tens of Palestinian journalists in the Gaza Strip had had their access to the WhatsApp platform limited during the last Israeli aggression. This specifically included journalists from Aljazeera,  Agence France-Presse, as well as other journalists in Jerusalem.

Associated press reported that more than 17 journalists in Gaza had had their access to WhatsApp arbitrarily terminated during the last aggression on the strip. The report related this violation with similar takedowns that targeted Palestinian content on Facebook, a platform owned and run by the same company that hosts WhatsApp.

The Google search engine has been criticized for Keffiyeh, this is the reason

Desk Jabar reported on the recent controversy surrounding Google’s listing of the Palestinian kuffieyeh as a symbol of terrorism.  The report cited an interview with Nadim Nashif, the CEO of 7amleh, who illustrated how large technology companies have for long continued to shape negative narratives about Palestine.

Pikiran reported on the recent discovery by Palestinian activists that Google lists the Palestinian kuffieyeh as a symbol of terrorism.  The quoted Nadim Nashif, the CEO of 7amleh, who highlighted that this is part of a greater pattern, in which Google has for long perpetrated violations against Palestinian digital rights.

Watan hosted an interview with Mona Shtaya, the Advocacy Director at 7amleh, in which they addressed over 500 violations conducted by social media companies against Palestinian content online during the last Gaza aggression. Shtaya detailed that 50 percent of these violations were committed on Instagram, 35 percent on Facebook, 11 percent on Twitter, and 1 percent on TikTok.

Communication sites are a partner in crimes against our people

The Palestinian Journalists Syndicate made an official statement in which it considered that social media has become a partner of the occupation in the crimes committed this month against the Palestinian people. The Syndicate demanded that the administrations and officials of these sites be included in the international investigations into war crimes and crimes against humanity committed by the occupation during its comprehensive aggression against the Palestinians.

Rafaela Goichman reported that about 30 accounts of right-wing Jewish activists, who had used the service to promote violence as well as incite against Palestinian citizens of Israel, were banned by WhatsApp. The reporter emphasized that these accounts were banned without a warning or explanation.

Voa News reported on the targeted closure of the accounts of dozens of Gaza journalists during the last Israeli aggression on the Gaza Strip. Specifically, the report details that over 17 journalists had their accounts banned, and only four were able to restore them following the ceasefire.

Al-Quds Al-Arabi reported that journalists in the Gaza Strip took to the street to protest and condemn the aggression they faced during the last Israeli attack, specifically regarding the destruction of al-Shurouk tower which hosted the offices of multiple local and international news agencies.

Middle East Eye reported that social media activists were able to notice that the Google search engine classifies the Palestinian keffiyeh as a terrorist symbol. Specifically, the report found that the search engine lists the keffiyeh as the top search result when googling: 'what types of headgear or scarves do terrorists wear.’ The report interviews Nadim Nashif from 7amleh who said this is not unusual to come from Google. He noted that for long “the policies of Google - whether in Google Maps, YouTube or Google's Knowledge Panel - discriminate against Palestinians, spread misinformation and disinformation, and perpetuate racist and dehumanizing stereotypes, contrary to human rights laws and norms.”

"Facebook" and the aggression on Gaza ... "digital resistance" confused the social media giant

Masrawy reported on the ongoing violations against Palestinian content, taking place on the different social media platforms online, specifically during the last aggression on Gaza. The report cited the “Hashtag Palestine” research by 7amleh, in which it was reported that 81% of the removal requests submitted by the Israeli Cyber Unit to Facebook were accepted.

The conversation reported that during the last aggression on Gaza, Palestinian content on different social media platforms faced targeted and unjustified takedowns, that amount to censorship. The report accused social media companies of being complicit in the overall censorship the Palestinians generally face. To this end, the report cited 7amleh’s most recent report on the takedowns that took place this month, which documented over 500 violations.

Truthout reported that Rashida Tlaib has written a letter to social media companies asking that they stop removing and suspending posts and users from their platforms for spreading information about Israeli violence against Palestinians. Tlaib’s letter came after a series of targeted violations against Palestinian content online during the last aggression on the Gaza Strip. The report cited 7amleh’s latest report which documented over 500 cases of this sort.

Middle East Monitor reported that over 17 journalists in Gaza had their WhatsApp accounts banned following the last aggression on the Gaza Strip. The report cited 7amleh’s last report in which over 500 cases of violations of similar nature, that involved Facebook, which is run by the same company that hosts WhatsApp, that took place during the same period.

Israel, the digital apartheid that controls and silences the Palestinians

Voci Globali published a translation in Italian of the Executive Director of 7amleh, Nadim Nashif’s article on Digital Apartheid in Palestine. The article addresses the different ways the Israeli apartheid system in the offline world is reflected in the digital realm.

Human Rights Watch, along with 38 human rights organizations, published a statement calling on Google to immediately halt its decision to establish a new Cloud region in Saudi Arabia until it can clearly outline steps to mitigate adverse human rights abuses. 7amleh was one of the dignitaries on this statement.