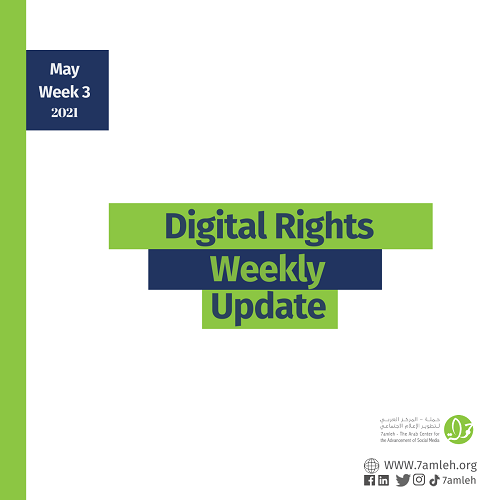 A group of Jewish Google employees called on the company to increase its support of Palestinians amid Israel’s deadly bombing campaign in Gaza. Read More

YouTube removed an ad that justified the Israeli bombing of Gaza after Motherboard contacted the company because the ad contained 'violent imagery.' Read More

How can fake news be verified and what are the most prominent strategies used in spreading propaganda and fake news? Nadim Al-Nashif, Executive Director of 7amleh answers these questions in this radio interview. Read More

7amleh to Wattan: Social media have become a place for incitement and for systematic brutal attacks by settlers against Palestinians in Israel (Wattan/ Arabic)

Palestinians have received messages, reportedly from the Israeli intelligence agency, threatening them for taking part in protests in Jerusalem. Read More

The former executive at Facebook Ashraf Zeitoon says that Facebook is censoring posts about Palestine, like videos taken in the aftermath of the raid on Al Aqsa and that the Israeli government has been pushing the company to do it. Read More

Interview with Palestinian HRDs: The realities on the ground (Front Line Defenders/ English)

Mona Shtaya from 7amleh shed light on the Palestinain situation on the ground, what Palestinians need to support their struggle, and what the reality of the struggle is for Palestinians. Read More

The Palestinian Mission to the UK said on Facebook that it had "received a letter of intent from Facebook to resolve serious issues" relating to the silencing of Palestinian voices by the social media platform. Read More

Online activism is spreading on Instagram, with more people sharing striking, vibrant graphics to inform their followers about the issues that matter, such as the Palestinian issue. Read More

Misinformation has flourished on Twitter, TikTok, Facebook and other social media about the violence between Israelis and Palestinians. Read More

The report, "#Hashtag Palestine 2020" by 7amleh provides an overview of violations occurring during a year in which Covid-19 turned Palestine upside down. Read More

Are social media apps censoring pro-Palestine content? The short answer is yes. The long answer is they’ve been doing this for a long time. Read More

Palestinians’ struggle to secure their digital rights is crucial in the face of mainstream media spin and collaboration of social media platforms with Israel to stifle their voices. Read More

Reports have emerged of the removal of some posts, photos and videos, as well as the blocking of accounts on major social media of Palestinians facing eviction from the Shaykh Jarrah neighborhood. Both platforms stated that they have fixed this mistake. Read More

In recent years, social media platforms have become a new source of income for individuals, but has also become a lifeline for thousands who want to raise awareness about causes that are so regularly ignored by mainstream media, many of which have strategic political interests that do not match these 'struggles.' Read More

Instagram Censored Posts About One Of Islam’s Holiest Mosques, Drawing Employee Ire (Buzzfeed/ English)
The photo-sharing app mistakenly removed content about the Al-Aqsa Mosque, the site of clashes between Israeli police forces and Palestinian worshippers, after associating the site with terrorism. Read More

With the on-going recent events in Sheikh Jarrah, Palestine, many people have chosen to speak about it. Like the same way George Floyd got justice because of his incident getting there on every social media platform shared by everyone, people are hoping that the same can happen for the people of Palestine. Read More

Pro-Palestine activists, who turned to the digital space for airing the horrible erasure of Palestinians, were sadly surprised to find their posts, photos, or videos removed or their accounts blocked. Read More

Sada Social has criticised Israel's attempt to "impose its hegemony on social media platforms" and censor content about the occupation state's ethnic cleansing of Jerusalem's Sheikh Jarrah neighbourhood as well as its war crimes committed in the Gaza Strip. Read More

Palestinians have tried to share protests at forced Sheikh Jarrah eviction on social media, but these posts have reportedly been removed, or their accounts have been blocked. Over 200 deleted posts and suspended accounts pertaining to content regarding Sheikh Jarrah, according to Mona Shtaya from 7amleh. Read More

Palestinians are increasingly reporting that their digital rights are being violated by social media platforms. Read More

As Palestinians took to social media to protest pending evictions, some found their posts removed or their accounts blocked. Read More

Palestinian and Jordanian social media activists in Jordan were surprised that Facebook closed the "Yalla to the Borders" group, which was established with the aim of mobilizing demonstrations near the borders with the occupied Palestinian territories. Read More

Since the attacks on Palestinians in East Jerusalem and later, Gaza began, many activists have spoken out against ‘digital apartheid’, which refers to the online censorship of pro-Palestine content on social media. Read More