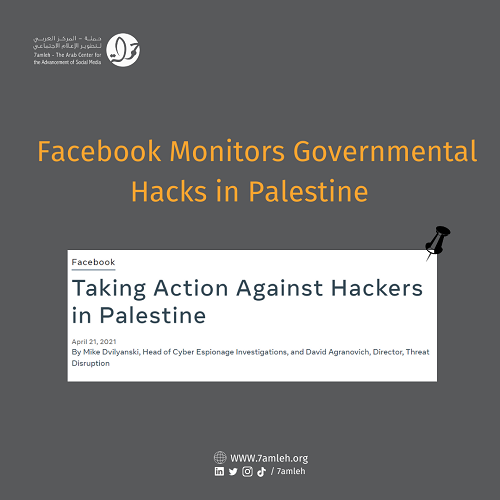 Ramallah, 22 April 2021 - The Palestinian Digital Rights Coalition (PDRC) condemns the Palestinian Preventive Security Service's involvement in privacy-infiltration activities, as well as targeting journalists, people opposed to the government, activists, human rights defenders and other groups, such as the Syrian opposition and the Iraqi army. As reported by Facebook, Wednesday, April 21, the Preventive Security Service used both its own malware, including secure chatting apps, as well as publicly available malware tools on the Internet.

The PDRC calls on Facebook as well, to assess the seriousness of the data that was compiled, and to address any damages caused to the accounts and devices of the victims of the breach. It also calls on the Palestinian Chief Public Prosecutor to open a serious and expanded investigation into the incident, and to bring all those involved, technicians and those directly responsible alike, to justice.

Yesterday, Facebook issued a statement in which it stated that it had closed the accounts of a group of hackers in Palestine. According to the report, the company caught two groups of hackers, one of which is affiliated with the Palestinian Authority's Preventive Security Agency, using malicious programs to infiltrate and collect information from Android devices, including geographic location, call log, contacts and text messages. In a few cases, a key-logger function was also used, which can record every keystroke performed on the device, in addition to malware to hack into Windows systems. The second group, known as "Arid Viper", mainly used malicious programs to infiltrate Android devices, as well as surveillance programs designed to monitor iOS devices and Windows systems, which were specifically used to target government officials, members of the Fatah party, student groups and security forces.

Both of these groups took advantage of the social engineering of the Palestinian society. For example, the Preventive Security Service group used fake accounts, mainly pretending to be women, or supporters of Hamas, Fatah, or other military groups, as well as journalists and activists, to build trust with their targets and deceive them into installing malicious programs.

The PDRC affirms that these attacks are a flagrant violation of Palestinian digital rights in general, and an infringement of the right to privacy and data protection in particular. This is also an illegal form of prosecution and harassment against activists, journalists, and human rights defenders. It is also an attack on the right to freedom of opinion and expression and privacy, especially in light of the upcoming elections, which Palestinians are witnessing for the first time in the era of social media. These incidents are only an example of how the digital world may be used to influence the upcoming elections, and are a serious indicator to the way Palestine has gradually been turning into a police state.

Furthermore, this attack violates the Presidential Liberties Decree issued last February, which guarantees: "The strengthening of the climate of public freedoms in all the territories of the State of Palestine, including the freedom of political and national action, in accordance with the provisions of the Basic Law and the relevant laws." Such prosecution and targeting of activists is considered a flagrant violation of not only this decree, but also of fundemental Palestinian digital rights in general.

Therefore, the PDRC calls on both the government in the West Bank and the de-facto authority in the Gaza Strip to work immediately to investigate the incidents described in Facebook's recent statement. The coalition stresses the need to protect the digital rights of Palestinians, and to immediately bring an end to any activities that may jeopradize the privacy, freedom of expression, and human rights of Palestinian individuals, as well as reitirates its commitment to the promotion and protection of Palestinian digital rights.