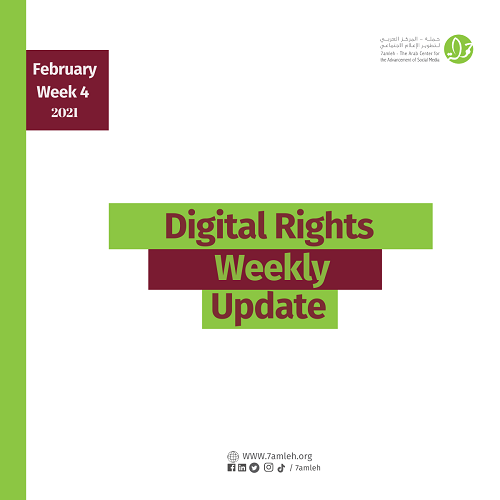 Lawyers for justice collective says that The Palestinian Preventive Security forces assaulted Mahmoud Al-Kaabi upon an investigation interview about a post on his Facebook page regarding the Palestinian elections. Read More

17 Activists in 17 cities delivered petitions with over 54,000 signatures to Facebook corporate offices calling Facebook not to not include “Zionist” in its hate speech policy. Read More

Whatsapp sets 15 May a deadline to agree to its new privacy terms but will let notifications continue for a short time afterwards. Read More

4. Criticism of Zionism is not anti-semitic, Facebook should make the distinction (The New Arab/ English)

Supporters of Israel are pressing Facebook to treat the term "Zionist" as a proxy for "Jew" and to therefore label harsh criticisms of Zionism. In this piece, Mitchell Plitnick discusses how hate groups are using Facebook to organise themselves and spread their propaganda. Read More

Clubhouse made assurances that user data couldn't be stolen by cyber-criminals or state-sponsored hackers, in response to a warning from Stanford University's Internet Observatory, which discovered several security flaws. Read More

Congress again calls the heads of Facebook, Google and Twitter, to a session to discuss the phenomenon of misinformation spread on their platforms. Read More

After first launching a limited test of warning prompts on tweet replies containing potentially offensive remarks, Twitter is now re-launching the alerts, with a new format, and further explanation as to why each reply has been flagged. Read More