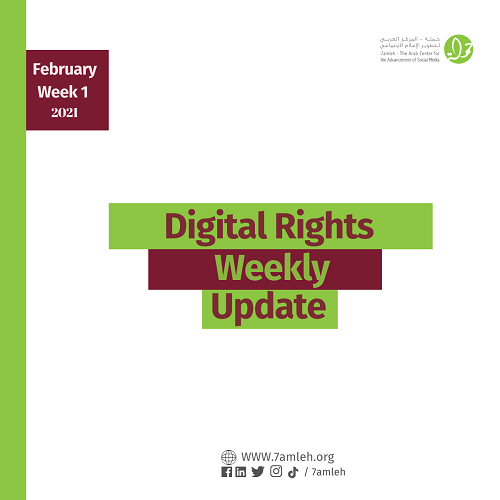 Activists across the world have launched an open letter petition called ‘Facebook, we need to talk,' which calls on the technology conglomerate to ensure that changes to its hate speech policy are not ones that would compromise free speech. Read more

Hundreds of activists, intellectuals and artists have launched an open letter calling on Facebook to ensure that any amendments to its hate speech policy keep all people safe and connected. The petition was signed by at least 15,000 people until Thursday. Read more

More than 28 various violations on the internet were reported by Sada Social Center during January 2021. The violations were distributed as follows: 17 violations by Facebook, 7 by Twitter, two by Tik Tok, and two by Instagram. Read more

4. Palestinian Authority issues a stark warning of digital economy tardiness because of deprivation of 4G and 5G spectrum for Palestine (Business Insider/ English)

The Palestinian Authority issued a strong warning that Palestine's momentum towards the digital economy is falling behind due to Israel's control over access to the 4G/5G spectrum. Read more

Mark Zuckerberg, announced that the platform will no longer recommend its users to join activist or political groups. Meanwhile, Facebook is working on considering Zionism and Judaism as synonymous meanings, with the aim of fighting anti-Semitis. Read more

6. Beware of it... a malicious text you receive on your phone steals your information and harms those you send over to WhatsApp (Al Jazeera/ Arabic)

Android users have been targeted by a malicious program that tricks them into downloading a fake application that also targets friends' devices via WhatsApp. Read more

The Wikimedia Foundation, launched a first-of-its-kind Universal Code of Conduct that expands on the project’s existing policies to create a global set of community standards for addressing negative behavior on the site.  Read more

8. Here's a way to find out if face recognition systems are using your photos (Al Jazeera/ Arabic)

Researchers developed an online tool called Exposing.AI, which allows people to search for their old photos in their photo collections. The tool provides a window into the vast amounts of data needed to build a variety of artificial intelligence technologies, from face recognition to online "chatbots". Read More