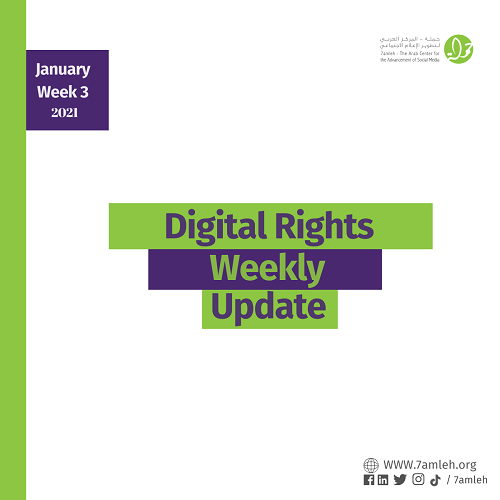 More than 200 violations against Palestinian journalists were reported by the Palestinian Journalists Union during 2020. The report mentions blocking and banning the journalists as well as removing their pages. Read more

More than 1200 violations were reported during 2020 against the Palestinian digital content, according to Sada Social Center. They included preventing users from posting and restricting their reachability..etc. The report shows that Twitter violations’ increased from 15 in 2019 to 276 in 2020.Read more

In response to WhatsApp's new terms of service, 25 million exoduded to Signal in 72 hours. The latter has crossed the 50-million mark on the Google Play Store. Unlike Whatsapp, Signal doesn't collect any metadata that can be linked back to the user and also encrypts all sorts of communication: voice calls, video calls, and messages. Read more

Facebook Inc's WhatsApp is delaying an update aimed at increasing business transactions on the platform after a storm of concern from users who feared that the messaging platform was watering down its privacy policy in the process. That sparked global outcries and a rush of new users to competitor private messaging apps including Telegram and Signal. Read more

Experts predict the Capitol Hill riot and subsequent banning of President Trump from social media platforms will force Facebook, Twitter and others to change. They claimed that banning Trump is “a big power move by the private sector, governing what is public speech”. Read more

Facebook was going to compete with Google for some advertising sales but backed away from the plan after the companies cut a preferential deal, according to court documents published in The New York Times. Google disputed the claims. Read more

Artificial intelligence researchers at Facebook claim they have developed software that can predict the likelihood of a Covid patient deteriorating or needing oxygen based on their chest X-rays. Read more