On Saturday 2nd May, 2015, 7amleh (Hamleh) - the Arab Center for Social Media Advancement, took a bloggers bus on a field trip to the unrecognised village of Dahmash 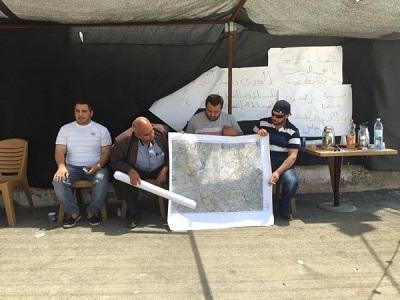 On Saturday 2nd May, 2015, 7amleh (Hamleh) - the Arab Center for Social Media Advancement, took a bloggers bus on a field trip to the unrecognised village of Dahmash. The village has been subjected to a series of demolitions while being refused building permits, all under the pretext of illegal construction. However, the families of Dahmash state that they have every reason to believe that they are systematically denied these permits only because they are Palestinian. While they are forced to live in deplorable and unsanitary conditions, Jewish residents live in newly built upscale neighbourhoods nearby and receive all the necessary permits and services. The main goal of the trip was to allow bloggers, social media activists and journalists to acquire first hand experience by touring the village, seeing the demolished homes and talking to the families who used to live in them, as well as those families who live with the fear of losing their own.

The bus was equipped with a wireless connection to allow participants to publish their impressions and experiences as they happened. All posts were published under a main hashtag (#Dahmash) and a series of other hashtags agreed upon by the group. The trip was backed up by extensive social media activity by the participants on the ground and Palestinians and solidarity activists further afield. Photos, tweets, statuses and articles all bearing the Dahmash hashtag (#) swept social media networks with messages of solidarity and support for threatened Arab communities in the central region, and particularly for Dahmash whose families facing demolition and eviction have been a special focus of 7amleh's campaigning. Among the tweets and posts were the following: #Dahmash - the Nakba continues! The law is not legal in #Dahmash!

The village was set up by the state #Recognise_Dahmash. 70 houses with 1 address #Recognise_Dahmash Dahmash itself is a Palestinian village located on the '48 side of the Green Line, between the towns of Lydda and Ramle. Its families have been living there since 1951 and it today numbers around 700 residents and 70 houses. Although these families received these lands from the state, the village has never been recognised by Israel.

Israel agreed to ‘compensate’ those families it expelled from different regions by giving them a land in Dahmash that accounts for 15% of the land that the state confiscated. The families living now in Dahmash agreed to the land swap agreement, assuming that they would be allowed to rebuild their lives without being persecuted. All families now declare that they regret this deal.

The tour benefited from the participation of local hip-hop artist Tamer Nafar of the DAM rap group. Tamer started the tour near the Dahmash mosque in Lydda. He spoke of the city’s history, from the massacre of 160 residents in 1948, to the overt racial discrimination which continues today, as evidenced by the blatant inequality between Arab and Jewish neighbourhoods and successive policies aimed at forcing Arab residents to leave, creating a link with Arab neighbourhoods such as Silwan in Jerusalem.

Local activist Rami Younis meanwhile spoke of a feeling of isolation among Palestinian residents of Lydda, Ramle, Dahmash and Jaffa, and of being cut off from Palestinians in the north of the country. Tamer and Rami also led the group through a tour of one of Lydda's most deprived areas, Almahatta neighbourhood around the railway station. With a population of around 6000 before the Nakba, only a few hundred managed to remain after the city's fall to Zionist militias. After the ensuing creation of Israel, numbers were then increased by internally displaced Palestinian refugees from the southern cities of Beer Sabe’, Asdoud and Askalan (now: Beersheba, Ashdod and Ashkelon).

The neighbourhood now houses around 9000 people in cramped, dirty conditions. No services are provided and no building permits have been issued since the 1948 Nakba, with residents squeezed in next to the largest railway junction in the country, their homes rattled daily by 300 passing trains. While in Dahmash the tour was hosted by members of the village's Popular Committee, with its head Arafat Ismail detailing the struggles the committee faces, and of the possibilities of forming a unified group with residents of Lydda and Ramle also facing threats of demolition. The committee talked about the legal battles they have to fight for every basic right. One example was explaining how they had to go to court in 2006, fighting a legal battle to send their children to school in Ramle. Parents and children in the village also shared their stories of daily worry, and their fears and hopes for the future.

At the end of the tour Minem Marouf, board member of 7amleh, stated: “By organizing these tours on a monthly basis, we aim to connect between activists on the ground with activists in the virtual spaces of the various social media platforms. It is of monumental importance to use these platforms to raise public awareness to the systematic deprivation of living spaces which Palestinian citizens of Israel suffer from. Israel continuously tries to shrink our living spaces through blatantly discriminatory housing policies and Jewish only privileges in public land authority projects, both of which are in violation of basic human rights”.