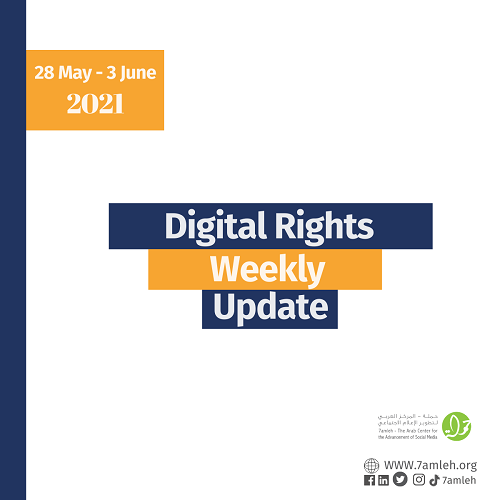 Instagram announced that it would implement changes to its story feature algorithm, in which it will no longer favor original content to reposted content, as this feature of the algorithm resulted in the censorship of many Palestine-related posts in the past month. The report cited 7amleh’s recent report in which it documents 500 cases of digital rights violations of Palestinians during May 2021.

NBC reports that Facebook currently struggles with a reputation crisis in the Middle East after repeated deletion of Palestine-related posts without sufficient warning or explanation. Users in the Middle East, NBC reports, feel under-represented and discriminated against. The report cites a quote by Mona Shtaya from 7amleh about the efforts of the Israeli authority to target Palestinian content on Facebook.

Mind your language: How anti-Palestinian bias is framed in US media

This report relies on an MIT study of the New York Times reporting on Palestine, in which patterns of orientalism, bias, and misrepresentation are identified. The report cites a quote by Nadim Nashif in which he reveals that research by 7amleh -- the Arab Center for the Advancement of Social Media, found that Western media reporting is often biased against the Palestinian narrative while covering Israel in a very sympathetic light regardless of facts on the ground.

Amid Israeli–Palestinian Violence, Facebook Employees Are Accusing Their Company Of Bias Against Arabs And Muslims

Amn Egyptian engineer wrote an open letter to Facebook in which he expressed his concern over rising mistrust among users in the MENA region, especially after the dramatic increase of censorship on the platform, against Palestinian content during the 2021 Israeli attack on the Gaza Strip. The letter expressed fear that the next “mistake” would be the last straw that would bring users in the region to mass-migrate to other platforms, and that this is the result of “years of implementing policies that do not scale globally,” hinting at inherent and systematic bias in the policies and algorithms that govern the site.

Big Tech censors Palestinian advocacy around the world, while fostering surge in Jewish extremism in Israel

Mondoweiss reported extensively on the censorhsip that took place against Palestinian content during the 2021 Israeli attack on Gaza and the Jeruslamite neighborhood of Sheik Jarrah. The report cites multiple research studies by 7amleh and interviews Mona Shtaya, the Local Advocacy Director at the center, to illustrate the inherent biases in the algorithms that govern content moderation at social media sites, which systematically censor Palestinian political speech and content, while allowing anti-Palestinian hate speech and inctitement.

This report on global censorship online includes a section on Palestine, in which it reports on the censorship Palestinian content faced during the 2021 Israeli attack on the Gaza Strip and repression of demonstrations in Sheikh Jarrah, as well as an earlier dispute within Facebook regarding restrictions relating to the word “Zionist.” The report includes an interview with Alison Ramer about the censorship that took place and cites 7amleh’s latest report on over 500 violations of the digital rights of Palestinians that took place in May 2021.

Al-Quds Al-Arabi reported on 7amleh’s work in response to the wave of takedowns against Palestinian content during the last Israeli attack on the Gaza Strip as well as mixed cities in Israel. The report cites 7amleh’s last report about the 500 cases the center documented and responded to, as well as the note the center sent to Facebook on the matter, and lastly the meeting 7amleh contributed to between the Palestinian Prime Minister and Facebook.

Instagram changes algorithm amid criticism of curbs on pro-Palestinian contents

Instagram announced that it would change the algorithm that determines the number of views stories on the platform receive, in which it would no longer favor original content over reposted content, as this part of the algorithm led to the censorship of large amounts of Palestine-related content in May 2021. The report cites 7amleh’s last report on over 500 violations the center documented against Palestinian digital rights in that period.

The Dangers of Facebook When They Censor the Palestinian-Israeli Conflict

This report illustrates the dangers of censorship on Facebook, as manifested in the most recent wave of censorship against Palestinian content during the Israeli attack on the Gaza strip in May 2021. The report cites 7amleh’s report on over 500 reports of violations the center documented and responded to in that period.

A group of civil society organizations wrote a collective letter to Facebook in which they express rage and concern regarding the censorship of Palestinian voices during the last Israeli attack on the Gaza Strip, Jerusalem and mixed cities in Israel. The report cites 7amleh’s report on over 500 cases the center documented and responded to in May 2021.

Instagram announced that it would implement changes to its algorithms, in which it will no longer favor original content in the story feature, as opposed to reposted content, as this feature resulted in the mass censorship of many Palestine-related posts in the past month. The report cites 7amleh’s latest report on 500 cases of digital rights violations of Palestinians in May 2021.

This report illustrates the way algorithms at Facebook and Twitter that are designed to protect users, often mistakenly overcorrect and penalize posts by marginalized communities trying to document and denounce human rights violations on these platforms. This was observed in the Black Lives Matter movement as posts relating to “race” were censored, and similarly during the recent Israeli attacks on Sheikh Jarrah and the Gaza Strip, as Palestinian content was indiscriminately taken down. The article cites 7amleh’s report on 500 cases of violations the center documented and responded to in May 2021.

This report documents a series of violations against the digital rights of Palestinians by both the Israeli authority and social media companies, which involved the removal of Palestine-related posts and the accounts of Palestinian and pro-Palestinian users during the last Israeli attack on the Gaza Strip. The report uses data from 7amleh’s report on over 500 violations the center documented and responded to in May 2021.

Facebook Censors Posts Related to Palestine, This Is a Danger That Can Be Caused

This report illustrates the dangers censorship on Facebook can have on social movements, especially in the case of Palestine, where online platforms are almost the only platform for Palestinians to document and denounce the human rights violations they are often subjected to. The report cites a quote by Nadim Nashif on the need for transparency by social media companies, as well as 7amleh’s latest reports on 500 violations of Palestinian digital rights in May 2021.

BBC reported that Instagram has announced that it would modify its Stories algorithm, in an effort to no longer favor original content over reposted content — a setting that caused the removal of many Palestine-related posts in May 2021. The report cites reports by the Financial Times and Buzzfeed on the matter, in which it is reported that internal strife at Instagram took place regarding the censorship of pro-Palestinian content.

Facebook is facing a reputation crisis in the Middle East, following its mass censorship of Palestine-related content during the last Israeli attacks on Gaza, Sheikh Jarrah and mixed cities in Israel. This was manifested in a campaign to mass low-rate the application on the Apple app store, and accusations of bias against Palestinian voices. While Facebook argues that the censorship that took place was a result of a group of technical errors that should not have happened in the first place, the report cites interviews with Ashraf Zaitoon and Mona Shtaya who illustrate the different ways Facebook has developed a strong relationship with the Israeli government, which has had a direct impact on the number of reported and removed Palestinian content on the platform, as well as the other methods Israeli mobilizes to target Palestinian content on the platform, such as bots and collective reports.

This report illuminates the ways the Israeli authority mobilizes digital platforms to violate Palestinian rights. Specifically, it addresses the biases in the mapping provided on the Google Maps platform, as well as the direct relationship between the Israeli Cyber Unit and some social media companies, especially Facebook and Instagram. The report cites a study by Nadim Nashif published in 2017 titled “Surveillance of Palestinians and the Fight for Digital Rights.”

How digital activism is putting the global spotlight on Palestine

This report describes the forms of digital activism Palestinians and supporters used to promote the Palestinian cause internationally using social media platforms, hashtags, and citizen journalism. The report also describes the level of censorship these efforts were met with, and cites a quote from Mona Shtaya’s interview with Al-Jazeera, in which she challenges the justifications and excuses put forward by companies who perpetuated such censorship.

Key48: Meet the British-Palestinian whose online activism is changing the game for Palestine

Farah Koutteineh is a Palestinian activists and the owner of Key48 on Instagram, in which she publishes comic in support of the Palestinian cause. Farah’s comics were reposted by thousands during the 2021 Israeli attack on the Gaza Strip. Farah’s account was censored by Instagram algorithms in multiple forms including repeated content removal.

The Israeli Defense Minister distanced himself from comments made by the Israeli Army Chief on the bombing of the Jalaa building in the Gaza Strip, which hosted the offices of Al-Jazeera and Associated Plus. Specifically, the Army Chief had said that the building was used by Hamas electronic experts to wage “electronic warfare” against Israeli GPS systems, and that workers in said news agencies would “drink coffee in the building cafeteria” on the daily with Hamas members. The claims were denied by AP who said there was never even a cafeteria in the building.

Nearly 200 Facebook employees have signed an internal petition calling for the company to investigate content moderation systems that led many Palestinians and allies to say their voices were being censored. They wrote in the letter: “Our users and community at large feel that we are falling short on our promise to protect open expression around the situation in Palestine… we believe Facebook can and should do more to understand our users and work on rebuilding their trust.”

Tech employees and Palestinian rights activists want companies like Amazon and Google to sever their ties to the Israeli government and accuse Facebook of "silencing" their cause. These efforts have only increased after a ceasefire was announced, bringing the 2021 Israeli attack on the Gaza Strip to a temporary end. These efforts are particularly targeting Amazon and Google’s most recent deals with Israel, and are taking place through circulating internal petitions, cajoling shareholders, in addition to other options.

Borat actor Sacha Baron Cohen has criticized Twitter and its CEO, Jack Dorsey, over the platform’s “failure to take action over antisemitic posts.” The actor referred to hashtags such as #Hitlerwasright that became trending in the last month. The report also refers to the biased censorship Palestinian content faced on the platform, as part of which many Palestinian accounts were suspended.