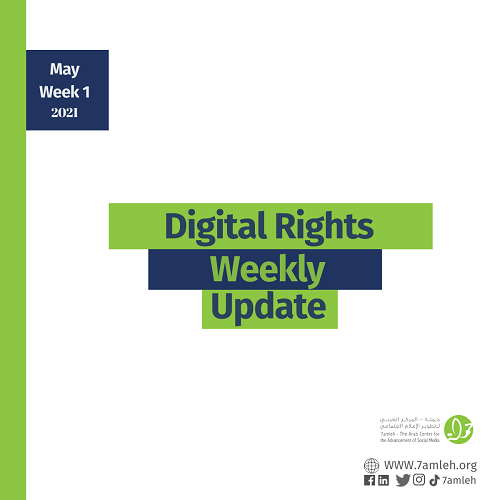 The European Union Representative in the West Bank and the Gaza Strip expressed concern over the attack that targeted the residence of an activist calling on the Palestinian Authority to "respect freedom of expression" in a Facebook video. Read More

Misbar: April was full of events followed by widespread of fake news

Last April, "MISBAR" recorded fake news in more than 45 countries around the world. Palestine was in the second place in publishing fake news. Read More

M.G Abu Baker: I call on the international community to protect Palestinian journalists and media professionals from the occupation's attacks (Commission of detainees and ex-detainees affairs/ English)

On the World Press Freedom Day, the head of the Commission of Detainees' Affairs Qadri Abu Baker calls for protecting the Palestinian journalists and activists from detention for their media and social media coverage and activism. Read More

A podcast about the Israeli Cyber Unit that sends Facebook and Twitter requests to remove the Palestinian content. In this podcast we learn about Adalah Center’s contribution to challenge legitimizing this unit by the Israeli Supreme Court. Read More

The European Parliament’s Home Affairs Committee agreed to a new regulation to prevent the dissemination of terrorist content online (TERREG). The regulation will allow the authorities in EU countries to have Internet content removed, within one hour, without requiring a court order. Read More

According to a UNESCO survey, 73% of the women journalists surveyed reported having faced online violence while doing their job. They are often targeted in coordinated misogynistic attacks. Read More

Facebook is continuing its campaign against Apple’s iOS 14 privacy updates, adding a notice within its iOS app telling users the information it collects from other apps and websites can “help keep Facebook free of charge.” Read More