The Palestinian Digital Rights Coalition invites you to join a twitter storm calling out on #Google to add Palestine onto their maps, this Wednesday at 8pm Palestine time. 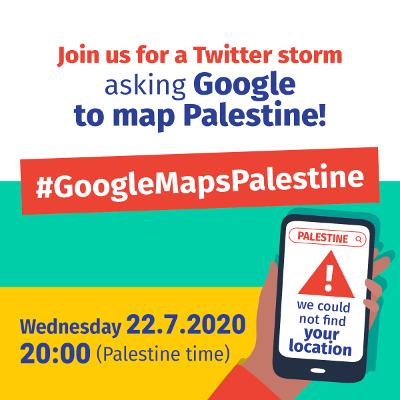 Why is Google adopting the Israeli narrative in its depiction of Palestine on its maps rather than abiding by the basic human rights standards? Google does not label Palestine on it’s maps. There are checkpoints and movement restrictions installed by the Israeli army forces on Palestinian civilians in the occupied West Bank that do not appear on the maps. This digital discrimination of Palestinians through Google Maps is contradictory to human rights and international law standards. See the press release here.

We kindly ask you to join the Palestinian Digital Rights Coalition member organizations in asking Sundar Pichai, Google CEO to abide by international human rights standards and obligations by putting Palestine on its maps.

Please find below a list of sample tweets, and images and videos to use in this google drive folder.

Joint Letter to the Secretary General of the Council of Mini...