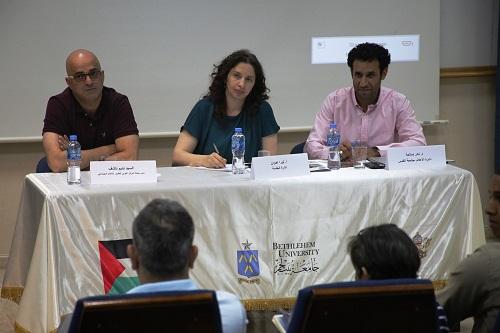 Social Science department at Bethlehem University and 7amleh – The Arab Center for the Advancement of Social Media, in collaboration with Civil Peace Service – Forum ZFD organised a study-day at Bethlehem University on “Social Media in the Service of Community Change’ The study-day was attended by large numbers of students, representatives from civil society organisations, journalists and social activists.

The day was opened with welcoming words by Dr. Fardous Abed Rabo Il-Issa, head of the social science department at the University of Bethelehm. She stressed how social media influences social and political views and introduced the concept and value of community participation.

Mrs Iris Lettman, from Civil Peace Service, focused on the importance of developing skills and raising awareness of secure use of social media, particularly in Palestinian society, where such tools are largely used for advocacy and for discussions of issues of public and political opinions.

In a panel-discussion in the first half of the day, Mr. Nadim Nashif, director of 7amleh Center, talked about Palestinian digital rights and internal and external threats to those rights. He reviewed existing threats to Palestinian citiziens’ rights in the internet, as well as political threats and unfair laws limiting freedom of expression and arrests on the allegation of ‘incitement’. Additionally, he discussed threats preventing in particular women and girls from using the internet, and commercial threats to our data and privacy as users.

Dr. Nadar Salha, head of the information department at al-Quds university described the evolution of technology and software from the 70s to the present day, including the emergence and development of internet and the development of social networks and their impact on Palestinian civil participation. He also dealt with digital security and how information is gathered about our lives. He concluded his lecture by analysing recent public campaigns such as the campaign to lift sanctions on the Gaza Strip and against the tax-law in Jordan.

Finally, the day was concluded with a series of workshops: (1) Tareq El-Bzour, 7amleh Center: digital security in the internet. (2) Hassan Jaddah, Concepts:best practices for non-profit organisations (3) Derrar Ghanem, Build Palestine: crowdfunding (4) Eyad Barghouti: social marketing and work-strategies for Palestinian organisations and society The participants voiced appreciation for the discussions and learnings made possible through this event and called on the organisers to hold similar events in the Bethlehem and southern area of the occupied West Bank.

"Social Media in the Service of Community Cha...