News
Palestinian Civil Society Organizations in Israel: Demand Immediate Release of the Detained, Peaceful Protesters in Haifa and Investigation into the Use of Brutal, Excessive Force by Israeli Police against Them

Protests have erupted all over the world in recent weeks in response to barbaric and inhumane military attacks by Israeli forces against unarmed Palestinian civilians protesting in Gaza in the “Great March of Return”. The actions of the Israeli military, which has employed live ammunition (over 3,500 rounds), have resulted to date in the killing of 106 Palestinians, including 15 children, and the injury of over 12,000 more. Protests in solidarity with the Gaza victims have taken place in Israel, and the city of Haifa has experienced the highest number of cases of police brutality against demonstrators, in addition to arrests of activists and students. 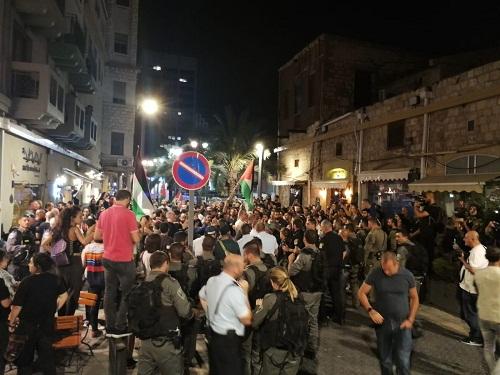 Haifa, Saturday, 19 May 2018. Demonstrators have been gathering daily to peacefully exercise their right to protest and stand in solidarity with the “Great March of Return” victims. As the protests in Haifa have continued, police have escalated their use of violence against protesters culminating in mass arrests and widespread brutality witnessed yesterday evening, Friday, 18 May 2018. Police officers and Special Forces arrived to the protest armed and equipped to disrupt the peaceful demonstration. Police rapidly barged in and charged the crowd, beating the demonstrators without provocation and making sporadic arrests, as is clearly evident from video documentation and photographs taken at the scene. Twenty-one people were arrested in Haifa. Many, if not all, of the detainees (reports are still incoming) were brutally beaten by the arresting officers while in custody at the police station and in interrogation rooms, some while handcuffed. Some of the victims were taken to the Emergency Room (ER) and four are hospitalized for serious injuries. Amongst the hospitalized, Jafar Farah, Director of the Mossawa Center, who was rushed to the ER with a broken knee and severe blunt trauma injuries to the chest and abdomen sustained during a brutal attack on him by police officers while in custody. The undersigned Palestinian civil society organizations in Israel wish to express our deepest concerns and outrage at this brutal conduct by the Israeli police against unarmed protesters, and demand the immediate release of all detainees. We also request a full and independent investigation into the unjustified arrests and beatings of protesters while in police custody. Israel has increased its systematic suppression of the basic rights of citizens to freedom of assembly, protest, and expression, some of the most fundamental human rights, in response to peaceful demonstrations launched in solidarity with the Gaza protests in Haifa and elsewhere. It is the state’s responsibility to protect these rights, in accordance with international human rights laws, including the Universal Declaration of Human Rights. If Israel refuses to protect the basic human rights of its citizens, then the international community has a duty to intervene and take a firm and decisive stand against these violations.

Below is a list of the protestors detained in Haifa on18 May 2018:

The above statement is signed by: