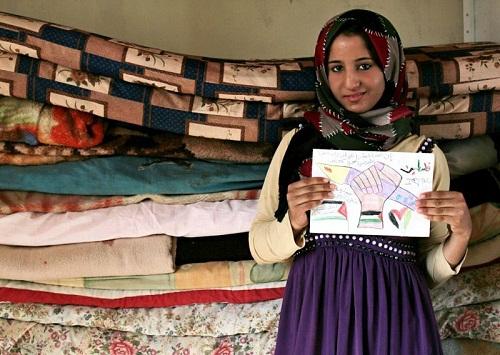 On Saturday, the 8th of October, 2016, 7amleh- the Arab Centre for the Development of Social Media, in cooperation with the PalVision , and with the participation of dozens of activists, photographers and bloggers conducted a pictorial documentation tour of the Jordan Valley area under the title "Act for the Jordan Valley".

The tour opened in the Jericho governorate building, where the participants met with the governor, who welcomed them warmly, and stressed the importance of the documentation of the continuous human rights violations against residents of the Jordan Valley.

The governor, during his speech, pointed at the colonial character of the settlement in the Jordan Valley area, adding that the Jordan Valley area constitutes 30% of the West Bank, but has the smallest population density. This is, he explained, a direct result of the policies of occupation since 1969, most particularly following the Al-Kamara Battle. The Israeli authorities have worked since then to strengthen the settlements, and systematically reduce the Palestinian demographic presence in the areas adjacent to the border. He reminded the participants that 85% of the Valleys are declared as closed military zones space, in addition to 11% of the area being confiscated and settled land. The confiscation of the most fertile areas, the majority of the water sources, and the Dead Sea resources, constitutes both agricultural and industrial exploitation. These facts also confirm the seemingly clear conclusion that the settlements in the Jordan Valley are seeking economic benefit, rather than tackling security issues, as is claimed by the Israeli establishment.

Following the meeting with the governor, participants went on a tour to the villages and communities in the Jordan Valley, the first stop of which was the village Fasayel, which is divided into two parts; Fasayel Fawqa and Fasayel Tahta. Participants were briefed on the nature of Israel’s violations in this villagae, the strangling of the Palestinian residential areas, the denial of the most basic necessities of life, such as water and electricity, and the narrowing of the opportunities of the people.

The participants listened to the intervention of the photographer Mohammed Badarne, who stressed the importance of sharing the images of the suffering of the village. He stressed the importance of backing up these images with the witnessing of the real story on the ground, and the direct contact with the people of the village. Participants then visited a similar scene, in the village of Jiftlik, where they met with the mayor and members of the municipality to explain and brief them on the suffering of the village, most especially the continued power cuts, in addition to the repeated settler attacks and attempts to burn the crops.

The tour wrapped up on a farm in the palm fields in the Jiftlik area, where attendees exchanged views on their observations during the day and opinions on how they could best shared. 7amleh, the Arab Centre for Development of Social Media has coordinated a series of documentary tours of areas exposed to the policies of displacement, and calls for bloggers, photographers and activists to participate in the upcoming events. This work is vital in order to develop the documentation process, and to convey the stories of the people suffering the most in a transparent and respectful way.