In early September, the Israeli government announced an agreement with Facebook “to work together to determine how to tackle incitement on the social media network.” The announcement came about 10 days before Facebook disabled the accounts of editors at two of Palestine’s most widely read online publications, prompting widespread online protest. Users had flagged the accounts as being in violation of Facebook’s community standards. 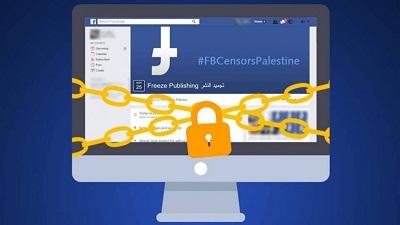 In early September, the Israeli government announced an agreement with Facebook “to work together to determine how to tackle incitement on the social media network.” The announcement came about 10 days before Facebook disabled the accounts of editors at two of Palestine’s most widely read online publications, prompting widespread online protest.

Users had flagged the accounts as being in violation of Facebook’s community standards. While Facebook quickly apologized and reinstated the accounts, the incident—along with the Israeli announcement—serve to highlight critical issues about the negative effects of bilateral collaboration between private social media companies and national governments on freedom of expression online.

Worryingly, such agreements are establishing a trend by which states and intergovernmental bodies seek to circumvent existing international and national legal frameworks that safeguard free expression, particularly in the name of countering violent extremism online. Further, closer evaluation of these relationships becomes increasingly urgent when such collaboration takes place in the context of occupation and conflict.

The spectre of violent extremism is being used to repress legitimate dissent. In Israel, the agreement with Facebook appears to legitimize an Israeli policy that in recent months has resulted in an estimated 400 arrests of Palestinians—both in Israel and the Occupied Territories—for “incitement” in social media posts, primarily on Facebook. Posts have included acts as simple as writing a poem.

States pressure private companies to engage in such agreements through shaming or “demonizing,” as well as threats of blocking, fines, or even imprisonment of company executives. They often justify this pressure by citing the companies’ own voluntary and proprietary terms of service and community standards, whose definitions of permissible speech are narrower than those encoded in their own constitutions or in the International Covenant on Civil Political Rights (ICCPR).

For instance, the Israeli announcement of the agreement with Facebook came amid reports of “proposed legislation that seeks to force social networks to remove content that Israel considers to be incitement.” Article 19 of the International Covenant on Civil and Political Rights (ICCPR)—to which Israel is a party—permits states to limit an individual’s freedom of expression only under select circumstances, including to protect the rights or reputations of others, national security, public order, public health, or morals. These limits, however, must first meet a three-part test as defined by the ICCPR: the limits must (1) be defined by law, (2) have legitimate aim, and (3) be truly necessary. Not only does strong-arming a social media company to censor its users according to its own policies meet no such test, it also precludes real accountability of either the company or the government to its users or citizens.

Israel is not alone; agreements between social media companies and the European Commission and government of Germany have made headlines and have been widely criticized by human and digital rights organizations. Nevertheless, social media companies also have an obligation to stand up to such pressuring and to make public when they are being asked to contravene the law. Finally, in the context of the Israeli Occupation, both the announcement and the growing trend of governments to outsource their human rights law to global social media companies is particularly troubling.

While laws that criminalize incitement apply in theory both to Israeli and Palestinian citizens, in Israel, recent reporting has demonstrated that they are overwhelmingly used to target Palestinian social media users, while Israeli acts of incitement often go ignored. In the Palestinian Territories, which are under military law, protesting and publishing anything relating to a “political matter” are prohibited. Consequently, Palestinians continue to endure mounting crackdowns on their digital freedoms in violation of the ICCPR at an alarming and unbalanced rate.

While recognizing Facebook’s attempts to engage civil society representatives, we, the undersigned organizations, fear that when Facebook or other social media companies negotiate special terms with states to govern censorship on their platforms, they risk becoming tools of those states, rather than being the platforms for free expression they aspire to be. When they do it with a state engaged in a decades-long occupation, like Israel, they similarly risk becoming agents of occupation and oppression. In short, in either case, they risk implicating themselves in limiting the very right they seek to promote. Therefore, we request that Facebook in its policies on content and account removal for “incitement to violence”:

·         Adhere to international human rights norms and tests, regarding freedom of expression on your platform

·  Apply your community standards universally, regardless of nation or territory, and engage civil society and users more vigorously in the development of those standards

·  Consider processes that would mitigate the amplifying effects of errors in content or account removal in politically contested spaces, such as occupation or conflict

More generally, we call on bodies that aim to protect and defend human rights at the international level to investigate the effects on free expression, particularly political dissent, of bilateral agreements between states and social media giants, especially in the context of the current agenda to prevent or counter violent extremism. Finally, as organizations and individuals deeply engaged in protecting and defending free expression online in Arab countries and globally, we remain ready to engage in constructive consultation. We also encourage users to report incidents of takedowns to OnlineCensorship.org, which contains resources on how to appeal decisions made by Facebook and other companies, as well as further information on the issue.