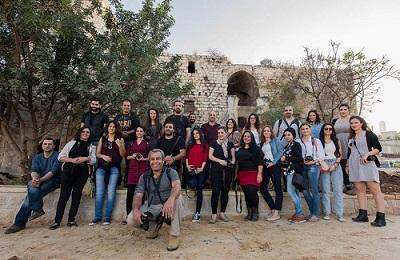 This tour was organised to explore, photograph and document the architecture and history of the neighbourhood in the context of repeated attempts in recent years by the local authority to remove it of its Palestinian character. The tour was led by professional photographer Mohamed Badarneh who, upon welcoming the attending photographers, emphasised its importance in challenging the attempts by the Haifa municipality to destroy its architecture, history and culture, and encouraged the use of a wide variety of different artistic methods of documenting and calling attention to marginalized Palestinian neighbourhoods.

The group was also addressed by activist and journalist Mona Omary who spoke about her experience documenting one particular building in Wadi Saleeb. Amary researched the history of the building before travelling to Jordan to meet with the Kanfani family who had been uprooted from it in 1948 and forced to become refugees in neighbouring Lebanon. Lastly attendees listened to urban planning expert Orwa Swetat who detailed the efforts of the municipality to destroy the Palestinian character of Wadi Saleeb through quarantining and destroying its old buildings, and selling Palestinian land and houses to large Israeli investment companies with plans to construct large modern buildings in their place.

Later on participants were divided into small groups and were each tasked with photographing different areas of the neighbourhood. These photographs will be used in both an online and a physical exhibition on Wadi Saleeb scheduled to open in 2016.