CAMPAIGNS
"We carry the memory": 15 years since October 2000

Over the last week 7amleh, in conjunction with the organisation Adalah, launched a public campaign in Arabic to mark the 15th anniversary of the killing of 13 Palestinian civilians (12 citizens of Israel, 1 Gaza resident) by Israeli police during demonstrations at the beginning of the Second Intifada 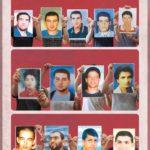 The campaign has featured images of young Palestinian citizens holding posters of the 13 young men who were killed, with the slogans and hashtags ‫#‏نحمل_الذكرى‬ ("We carry the memory") and ‫#‏أكتوبر15‬ ("October 15").

The campaign aims to renew public awareness of the continued absence of justice for the victims and their families and reaffirm the need for police accountability. In addition, it serves as a platform through which the continued discrimination, racism and violence of the State towards Palestinian citizens of Israel can be challenged.

Adalah represented the families of the 13 Palestinians before the Or Commission of Inquiry, which recommended that criminal investigations be opened in these cases. However, the Attorney General at the time, current Supreme Court justice Menachem Mazuz, decided in 2008 to close all of the investigation files. To this day, not a single Israeli officer or official has been indicted for the killings.

Will a new wave of Israeli legislation diminish internet fre...

Stay up to date with our latest activities, news, and publications
Subscribe