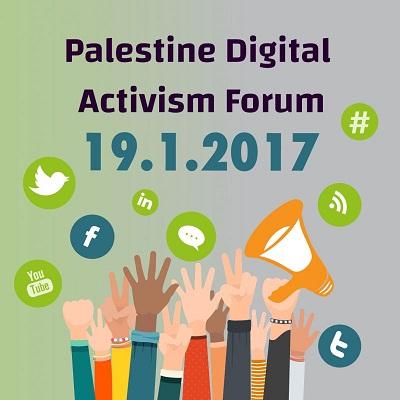 The Forum included an array of panels and workshops full of lively and constructive discussions on digital security and rights, and how the various digital instruments may be utilized creatively to bring a positive tide of change.

On his part, Simon Milner, Facebook policy director for the MENA, UK and Ireland, denied, for the first time, any agreements between Facbook and Israel. He also added that all Facebook users, bar none, are subject to the very same policies. He frankly stated that Facebook is not biased against either party. The removal of pages or accounts solely depends upon the reports received by the Facebook from the affected users.

The Forum recommended that digital rights be an integral part of the human rights. This was clearly stated by Manar Makhoul, 7amleh Board member, in his opening remark; “In this era, the digital rights, including the right to privacy, the right to personal info protection, and the right to safe Internet surfing, have become a substantial human right issue” . He also shed light on the growing importance of the social media use in the face of the Israeli violations.

In the first session, Nadim Nashif, Director of 7amleh, presented the results of 7amleh’s opinion poll on the Digital security by the Palestinian youth. The results unveiled, among other revelations, that 25 percent of Palestinian accounts were hacked, and 19 percent of the Palestinian social media users were intercepted by the authorities on the basis of their posts. Sahar Francis, Addameer Prisoner Support and Human Rights Association Director, confirmed that about 200 cases have been filed to the Israeli courts on the grounds that some posts on social media are found to contain ‘incitement’. Recently, Israel has been making every effort to legitimize this attack on freedom of expression under the Israeli Anti-Corruption Law, which governs the Emergency Regulations of the State of Israel.

Alexandrine Corbion, representative of Privacy International, argued that for the right to cyber privacy to be fully implemented will only occur with a mobilized civil society, which will require a lot of responsibilities to be assumed by all the stakeholders.

For her part, Wafa Ben-Hassine, representative of Access Now, asserted that individual cyber privacy should be part and parcel of human rights. She also called upon the stakeholders to focus on the responsibility of individual and private organizations as well as legislation. The constructive discussion grew hotter as the second session wore on. In this session, the floor was given to the Facebook and Youtube representatives.

Thawab Shibley, Research and Engagement Specialist YouTube at Google, reflected on Youtube’s policy on allowed contents. Around 400 hours are uploaded to Youtube per minute. All reported videos are reviewed on a daily basis. As a result, inappropriate contents (e.g. nudity and sexual content and violent or graphic content) are removed after review. Nevertheless, users may appeal against the removal, and the door is always left ajar for those who can convince Youtube of the context and reason for their videos.

The third session was given over to present a constellation of inspirational and innovative digital campaigns in pursuit of the good of civil society and positive change such as ‘Open Gaza’ campaign by AIDA, ‘Against Sexual Harassment’ campaign by Al-Siwar; ‘You Know App: Building Bridges between Decision Makers and Citizens' by Taghyeer for Social Media, Ziqaq App (provides information about the Old City of Jerusalem in both Arabic and English) by ‎Palestinian Vision Organization, and Azmeh (Checkpoint) App by Basil Sader.

What’s more, an array of workshops on the management of social medial, campaign strategy development, crowdfunding, digital security, and video advocacy targeting non-profit organizations and individuals. During the roundup of three day, the participants expressed their appreciation for 7amleh’s effort to hold this Forum, including all the workshops, programs, and activities. They, moreover, highlighted the essential role of such an event in setting these kinds of constructive discussions in motion on a regular basis.